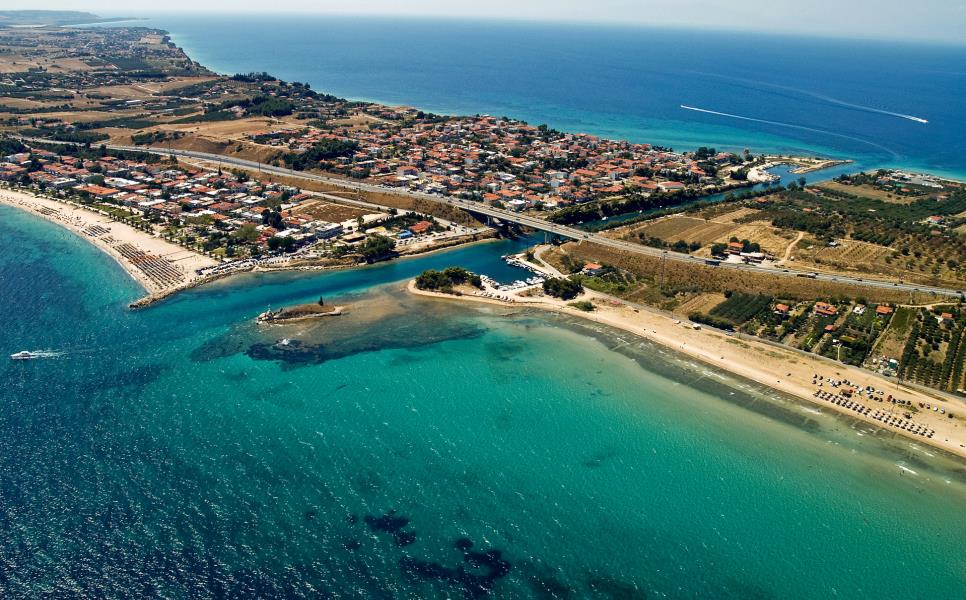 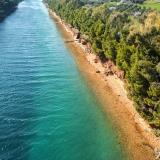 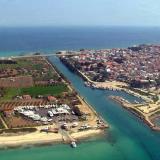 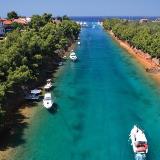 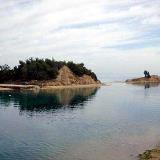 Νea Potidaia is the only point of access to the Kassandra Peninsula.
Its enchanting canal is one of its most unforgettable sights. Boats cross its waters on an everyday basis, including boats with acetylene lamps and dragnet boats, which fill up with a profusion of fish.
There are 1601 permanent inhabitants in the village, who in the summer go up to a few thousand.
At the organized, exquisite beach of Nea Potidea, one can enjoy the sea and savour plenty of fish, in one of the numerous fish-houses of the area.
On the village's hill, there is the picturesque church of the Virgin Mary who celebrates on the 23rd of August.
Nea Potidea was built in 1923 by refugees of Eastern Thrace and Kololimnos, on the ruins of the ancient city of Potidea.
Ancient Potidea was founded in 600 BC on the saddle of the Pallini Peninsula.
As the name of the city denotes, its patron was Poseidon. During the expedition of Xerxes against Greece in 480 BC, the city was defeated following a siege. However, a year later it gathered forces and resisted the siege of Artavazos. In the same year, it was the only city of Macedonia which, along with other Greek cities, took part in the battle of Platees.
Its history goes back a long way in the depths of the centuries. Potidea was a member of the first Alliance between Athens and Delos. It seceded from the alliance in 432/1 BC with the support of the Corinthians and King Perdikas II. In 431 BC, after the siege by the Athenian general Kallias, it was subjugated and subsequently forced to take in settlers from Athens. When the Peloponnesian war was over, Potidea was freed from the domination of Athens and received a second wave of Athenian settlers in 362/1 BC. In 356 BC, it was ruined by the king of Macedonia, Philip II and was turned over to the Olynthians.
In 349/8 BC the city had the fate of the other cities of Halkidiki, that is, it became part of the Macedonian Kingdom.
After a period of desertion of about 40 years, in 316 BC, Kassandros built on the site of Potidea a new city, which was named after him, Kassandria. In the following period until the taking of Macedonia by the Romans (168 BC), Kassandria developed into one of the most powerful cities of Macedonia. It was almost certainly during this time that the canal was opened up, which facilitated navigation and boosted trade and economic development.
In 168 BC, the city came under Roman rule and flourished a new.
Potidea's decay is linked to the invasions of the Huns, who invaded Macedonia in 540 BC. Consequently, despite Justinian's efforts in the 14th century AD, the city was completely deserted, according to historical sources. Its castle, being of great importance for the security of the whole peninsula, was repaired by Ioannis VII, Paleologos, in 1407 and later by the Venetians. In 1430 it came under Turkish domination.
With the Greek Revolution of 1821, the old fortification was repaired and reused, while in the same period the new cutting of the canal was made.
In 1821, the revolting people of Halkidiki entrenched themselves in the castle. They fought hard until the ”turmoil of Kassandra“, the well-known ”holocaust“ which is commemorated with big official celebrations every year on its anniversary, November 14th.