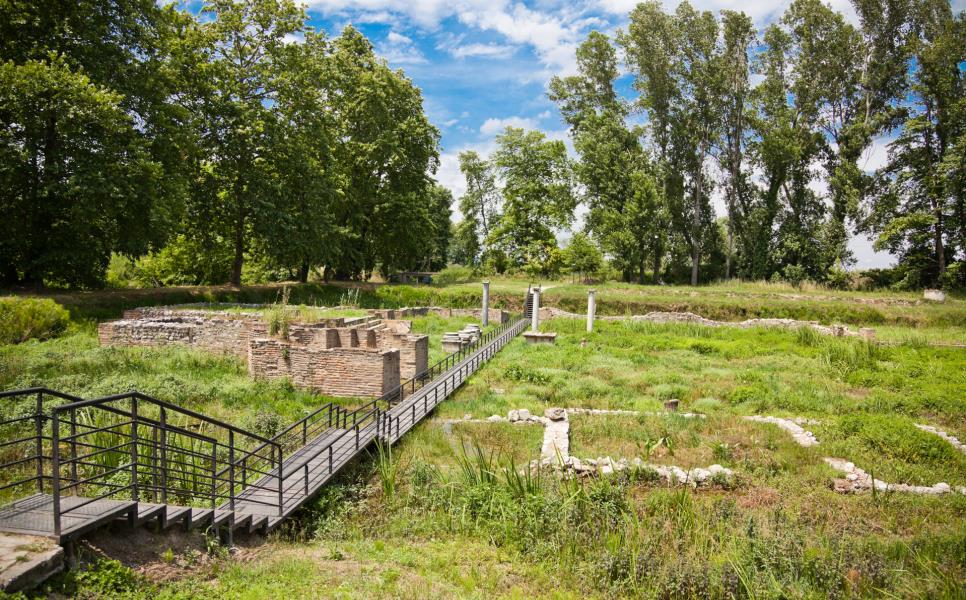 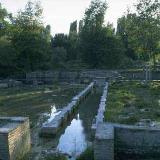 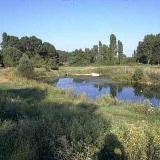 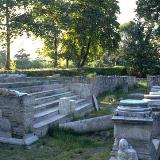 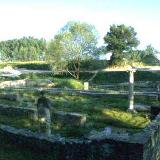 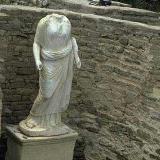 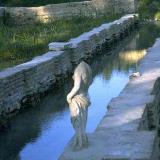 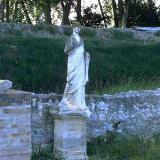 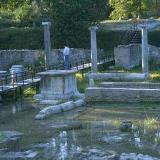 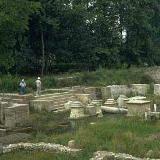 prev next
Displaying 10 out of 50 total images found for DION. View all.

On the foothills of Mt. Olympos only 5 km. from the Pierian shores, lies the city of ancient Dion. In an area forgotten until now but provided with inexhaustible natural charm, extensive archaeological excavations have been conducted by the University of Thessaloniki to discover the sacred city o the Macedonians.
The Macedonians used to gather at Dion to honor the Olympian gods with sacrifices and offerings. King Archelaos (414-399 B.C.) brightened these festivals with athletic and theatrical performances. There Philip II celebrated his glorious victories. Alexander, starting out his expedition, there sacrificed to Olympian Zeus and there the famous bronze group by Lysippos, representing the 25 horsemen fallen at the Granikos battle, was erected.
Rich discoveries cast much light on the history of Dion and the history of the Macedonians in general. Of particular importance were the results of the study of the religious practices of the ancient Macedonians. The sanctuaries of the gods, the Greek and Roman theatres and the stadium were found spread over a large area outside the city walls. This, of course, is not incidental; it undoubtedly proves that the sanctuaries were used not only by the inhabitants of Dion, but also served the religious needs of a greater number of people, much in the same manner as the great central sanctuaries, in the rest of Greece which, during their festivals, received thousands of visitors. Various pilgrims' offerings were placed in the sanctuaries of Dion. At the Sanctuary of Olympian Zeus especially inscriptions were set up referring to important state affairs such as peace treaties, regulation of boundaries, honorary decrees, etc. The Macedonians who crowded these festivals could read these texts and be informed.
Investigating the areas of worship led the archaeological pickaxe to the oldest known holy structures of the Macedonians. They are two small temples of the "megaron" type that is a building with an open antechamber and a cella. Various offerings have been found inside these structures, mainly idols, lamps and vessels made of clay, glass beads etc. Most of the finds belong to the Classical period and some date as far back as 500 B.C. According to all the evidence an earth goddess of fertility must have been worshipped there. This hypothesis was confirmed by an inscription found on a 4th century B.C. vessel referring to the name of Demeter. The excavations also brought to light finds related to the worship of other gods, such as a group of statues depicting Asclepius and his family. Next to the theatre, at the Temple of Dionysos, sculptures, inscriptions and more structures have been found. From the Sanctuary of Zeus come several inscriptions and the base of a big statue of King Cassander.
Dion remained hospitable towards foreign gods as well. The worship o Sarapis and Isis, advocated by the state propaganda of the Ptolemies of Egypt had arrived there in the Hellenistic period. A Sanctuary of Isis was located in 1978 immediately outside the SE corner of the city walls.
The rare luck of finding this sanctuary intact, just as it fell down after earthquakes tremors, is due to the mud of floods, which covered it immediately after the final catastrophe. In this sanctuary the worship of the Egyptian goddess Isis, as the inscriptions testify, succeeded the worship of Artemis to whom offerings were found dating from the Hellenistic period. A small temple housed the worship of another goddess, namely Aphrodite, who had in Dion a particularly characteristic name: "Hypolympidia", i.e. Aphrodite worshipped below Mt. Olympos. Ancient Dion was a well laid-out city. An elaborate network of roads paved during Imperial times, demarcated the housing and allowed the free circulation of pedestrians and vehicles. Fourteen roads have been located and excavated. The most impressive of the latter is a complex of public baths that covers an area of more than 4.000 m2.
This text (extract) is cited October 2003 from the Prefecture of Pieria tourist pamphlet.