Archaeological Site of Amphipolis, the Lion of Amfipolis (a burial monument of the 4th c. b.C.) was restored near the position it was discovered, next to the west bank of Strymon, close to the bridge

The lion of Amphipolis (4th cent. BC)

Founded as an Athenian colony in 438/7 BC, ancient Amfipolis was strategically located near the fertile mouth of the river Strymon and the Pangaion gold mines. The area surrounding the banks of the river was inhabited since the Neolithic period, while from the mid-7th century BC the north Aegean coastline attracts the dynamic city-states of southern Greece Chalkis, Eretria and Corinth, which along with Miletos, the major Ionian city of Minor Asia, establish colonies in the peninsula of Chalkidice and along the Thracian coasts. These colonies will have a strong impact on the material culture of the Macedonian inland, which from now on reflects strong Ionic features, as it is apparent from the Late Archaic and Early Classical sculptures or the burial findings of the site. Important evidence for the economic and cultural exchange networks provides also the imported Corinthian and Athenian pottery. Local tradition survives in metalwork, which is mainly represented by bronze and gold ornaments.
The Athenian presence in the area began after the Persian Wars. In 476 BC the Athenians occupied the city of Eion and established a settlement at Ennea Hodoi, which however lived shortly, until 464 BC. The foundation of Amfipolis finally in 438/ 437 BC, in the time of Pericles, by the general Hagnon was a great success for the Athenians, whose chief purpose was to ensure control of the rich Strymon hinterland and the Pangaion gold mines. Their success, however, was again temporary; at the end of the first decade of the Peloponnesian War (422 BC) Amfipoli seceded from its metropolis, Athens, and remained independent until its incorporation into the kingdom of Macedonia by Philip II (357 BC).
Under the Macedonians, Amfipolis remained a flourishing city and an important economic and cultural centre of the kingdom. The excavations have revealed so far remains of buildings and sanctuaries in the public and residential quarters of the ancient city. Extensive parts of the defensive walls are preserved to considerable height and in good condition, such as Gate C, the largest gate at the northern part of the walls. A remarkable structure and also rare to find in an excavation, is the bridge over Strymon, constructed by wooden beams.
After the Roman conquest of Macedonia (168 BC) Amfipolis became the capital of Macedonia Prima, one of the four regional divisions of the Roman province of Macedonia. As a station on the Via Egnatia and the capital of a rich hinterland, Amfipolis was favoured by the Roman emperors and, despite the devastations and sackings, remained one of the most important urban centres in Macedonia until late antiquity. The prosperity of the city is reflected in its monumental buildings with mosaic floors and mural paintings, as well as in the various and numerous finds of the excavations.

Sanctuaries
Sanctuaries dedicated to local deities and daemons, such as the muse Cleo, the hero - horseman Rhessos, the Nymph, the Strymon river and above all Artemis Tavropolos. The finds also provide important information about the cult of the Olympian gods, like Pythian Apollo, Artemis and Aphrodite, as well as Heracles, the Dioscuri and Asclepius. The religious life of the city, however, centred around Artemis Tavropolos, while in the Hellenistic and Roman periods the cults of the Egyptian gods and the deities Cybele and Attis became very popular. Numerous female figurines and vases have been found in a small bipartite sanctuary of a female deity, interpreted as thesmophorium or numphaeum, which lies close to the north wall of the city. Some of the finds date to the 5th century BC.

Public and private life
The economy of Amfipolis depended on the rural population which cultivated the fertile land of the Strymon valley, but there also was a thriving community of merchants, tradesmen and craftsmen. Coinage was a significant aspect of the history of Amfipolis, which in the Macedonian period was the seat of the royal mint. The archaeological finds also tell us something about the administrative organisation of the city, its institutions, authorities and officials. The excavations uncovered one of the most important buildings in the city, the Gymnasium, where young men received education and physical exercise. Of particular interest is the Ephebarchical Law which defines the proper education for youths between 16 and 18 years of age. The city theatre has been traced near the Gymnasium. The prosperity of the city was sustained by the local production of pottery, figurines, statuary and minor works of art. Finds from the private houses, sanctuaries and graves also paint a picture of the everyday life of the inhabitants.

Cemeteries
The dead were buried outside the city walls. The typology of the graves depicts differentiation of social and economic status. The monumental tombs of the Macedonian type clearly belonged to the city notables. The burial offerings, namely vases, figurines, weapons and jewellery testify to the wealth and artistic flowering of ancient Amfipolis. A renowned monument of burial character is the lion of Amfipolis, dating to the 4th century BC. It probably belonged to Laomedon, general of Alexander the Great.


EARLY CHRISTIAN AMFIPOLIS
Christian Amphipolis occupies the site of the ancient acropolis. At the close of Graeco-Roman antiquity, the capital of the Roman empire was transferred to Constantinople and Christianity was established as the official religion of the state. Amfipolis was among the first Christian communities to be established in the European continent; in the mid-1st century AD St Paul made here a short stop on his route from Philippi to Thessaloniki, a visit that made Amfipolis an important pilgrimage centre of Early Christianity.
By the 6th century AD, monumental churches had risen over the pagan sanctuaries of the erstwhile ancient acropolis. Excavations have brought to light four three-aisled basilicas of the 5th and 6th centuries BC with splendid mosaic floors. The most imposing Byzantine monument of the site is the central-plan hexagonal temple, a rare example for the Early Christian times, dated to the 6th century. A large rectangular building (bishop’s residence) and an attached circular structure incorporating the central hexagon comprise the church plan. The numerous findings of this period, such as inscriptions, coins, sculptures, pottery and minor works of art, further attest the prosperity of the city.
Though limited, when compared with the ancient city, Early Christian Amfipolis still occupied a substantial area, which probably expanded beyond the fortification walls. The plague in the 6th century AD and the subsequent movements of the Slav populations led to the gradual shrinkage and final abandonment of the city. After the 9th century AD a new extensive harbour town sprang up, known as Chrysoupolis, the medieval successor of Amfipolis until the 16th century. In the Strymon delta region there are also scattered Byzantine and Post-Byzantine structures connected with the properties ("metochia") of the monasteries of Mount Athos. Over the ancient ruins of Amfipolis a small settlement developed, Marmarion, which served as a stop-over for travellers crossing the river by the ford that was known as the Marmarion Ford. 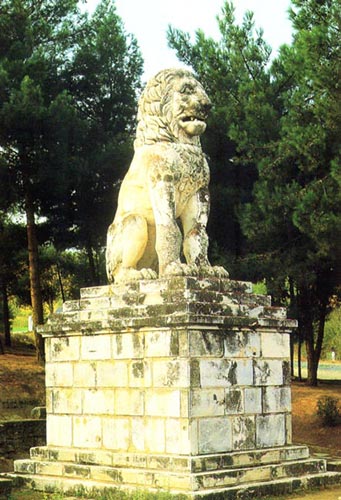 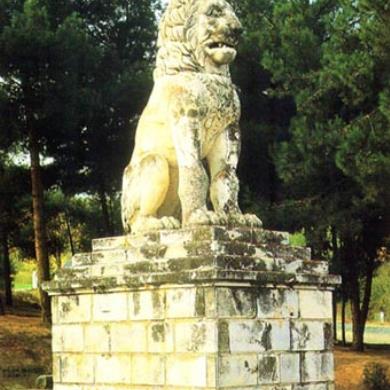 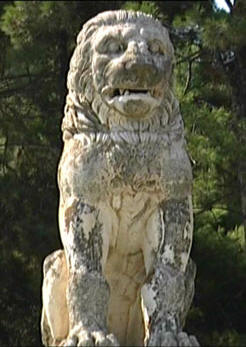 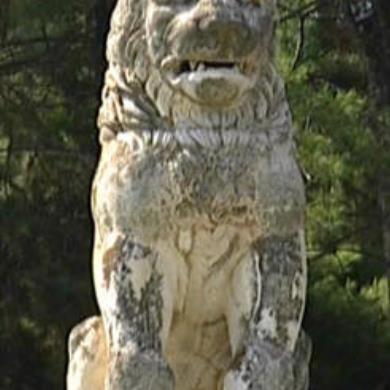 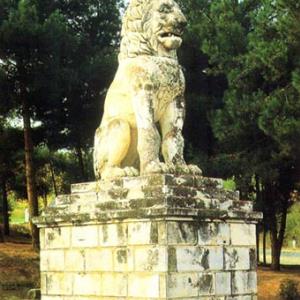 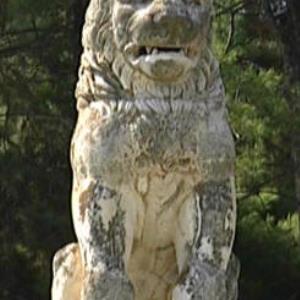