The new wing of the Archaeological Museum

Fragment of a 7th cent. krater, depicting the blindness of Cyclops Polyphemus by Odysseus

Museum, Cultural heritage
Head office Established: 1957
Address: 21200 ARGOS , ARGOLIS , GREECE
Tel.: +30 27510 68819
The museum of Argos comprises two sections, the "Kallergeion" Hall, built in 1832, and a new wing, added later. In April 1932, the heirs of J. Kallergis donated the building to the Municipality of Argos, which in 1955 also offered it to the Greek state in order for it to be converted into a museum.
The erection of the new wing was undertaken by the French School of Archaeology at Athens, under the direction of the Russian architect Formin. The "Kallergeion" Museum was inaugurated in 1957 and the new section in 1961.
The Museum contains finds from the excavations conducted by the 4th Ephorate at Argos and the surrounding areas, ranging from the Middle Helladic (ca. 2000 B.C.) to the Late Roman period (600 A.D.), finds from the excavations of the American School of Classical Studies at Lerna (Myloi), dating from the Neolithic until the Mycenaean period (5000-1100 B.C.), and finds from the excavations of the French School of Archaeology at the Ancient Agora, the area of the Theatre of Argos (ranging from the Archaic to the Roman period), and the Mycenaean cemetery of Deiras.
The most important items of the exhibition are:
Bridge-mouthed jug. The shape of the vase is of Minoan origin. It was found at Lerna and dates from the Late Helladic period (15th Century B.C.).
Phi-shaped figurine representing a "kourotrophos", a woman feeding a child. Figurines of this type have been found in graves and settlements of the Mycenaean period (14th - 13th Century B.C.).
Early Geometric pyxis (10th - 9th Century B.C.) decorated with a panel containing a maeander and parallel zig-zag lines. The knob on the lid points to Attic influence.
Late Geometric krater. The krater with the high, almost vertical handles, is the most common type of vase in the Argolid. It is decorated with panels containing geometric motifs, horses and water birds. It is the product of an Argive workshop.
Late Geometric krater. Characteristic krater with two horizontal and two vertical handles, the product of an Argive workshop. It is decorated with a metope containing three dancing women and water birds, while snakes are depicted at the lower part of the belly.
Terracotta pomegranates. They are wheel- or hand-made and date from the Late Geometric period. The pomegranate is a symbol of fertility and abudance and has been connected to chthonic (underworld) cult.
Bronze cuirass and helmet. From a tomb of the late 8th century.
Fragment of a krater decorated with a representation of the blinding of Cyclop Polyphemos by Odysseus and his companions. It is dated to the 7th century B.C. and is the first example of monumental vase painting which developed later in Greece.
Statue of Heracles. It is a Roman copy and belongs to the so-called "Farnese" type. It imitates an original statue made by Lysippos for the Agora of Sikyon.
Mosaic floor. The personified months of the year with their typical symbols are represented in panels. It comes from a house of the 5th century A.D. It seems that a mosaic workshop existed in Argos at the end of the 5th or the beginning of the 6th century A.D.
Red-figure krater. Attic red-figure vase depicting the fight between Theseus and the Minotaur in the presence of Ariadne. The vase is attributed to the Hermonax painter and dates to 460-450 B.C. 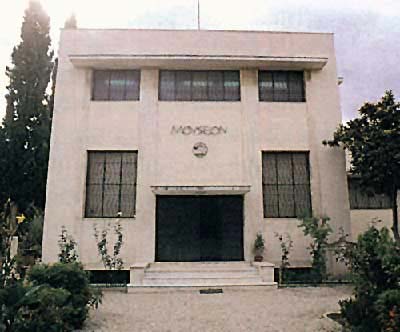 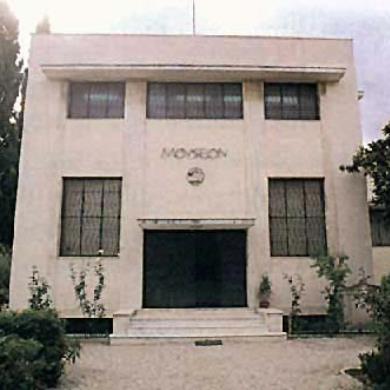 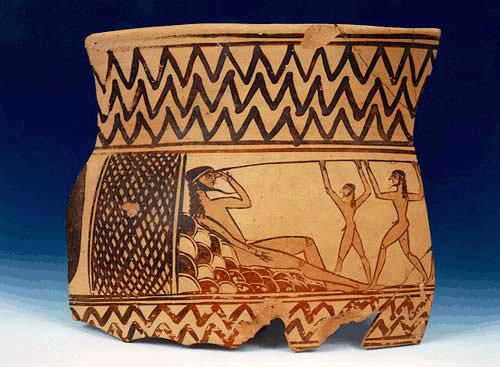 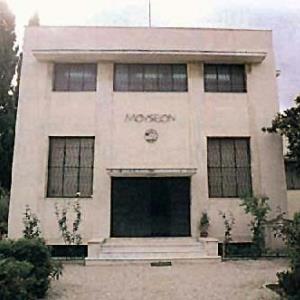