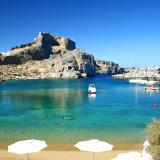 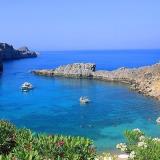 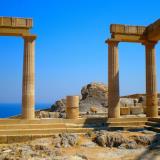 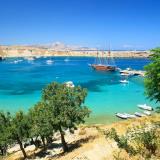 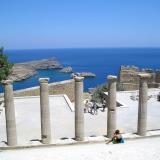 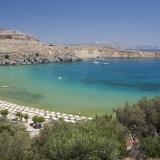 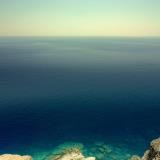 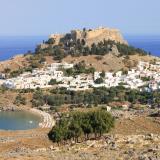 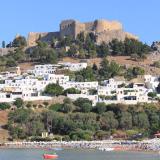 prev next
Displaying 10 out of 14 total images found for LINDOS. View all.

Lindos stands on the eastern side of the island, at a distance of 55 km from Rhodes town. According to tradition, it was founded by Lindos, brother of Kamiros and Ialysos. There were links between the culture of the ancient city and that of Mycenae, on which it seems to have exerted an influence. Lindos soon developed into an important commercial and shipping centre (between 8th and the 6th centuries BC), and it founded colonies throughout the Mediterranean basin. The city also made advances in the arts and letters. Cleobulos, on of the Seven Sages of ancient Greece, the poet Peisinus and the sculptor Chares, who created the famous Colossus of Rhodes, were all Lindians. The city continued to flourish through the Middle Ages, and was important in the manufacture of pottery, embroidery and woven goods. It was taken by the Knights of St. John and later by the Turks. From its long history, there are many traces to admire today. The most important monuments are to by found on the acropolis, where we can see the trireme carved in the rock, the colonnade of the temple of Lindian Athena, the Propylum and the temple itself. The temple once contained picture by the most famous painters of antiquity: Zeuxes, Apelles and Parrasius. The VII Ode of Pindar, in praise of the athletic triumphs of the Olympic victor Diagoras, was carved on the temple marbles. Of the monuments below the acropolis, the most important are the Tomb of Cleobulus, the Theatre and the Tomb of Archocrates. The village mansions are of great interest, as is the church of Our Lady.
On the coast near Lindos is the little bay of St. Paul, where according to tradition the Evangelist landed when he arrived in Rhodes to spread the new religion.
This text is cited June 2003 from the Rhodes Hoteliers' Association tourist pamphlet.