Museum, Cultural heritage
Head office Established: 1986
Address: 6-8, Evangelistrias Street 22100 TRIPOLI , ARCADIA , GREECE
Tel.: +30 2710 242148
It is housed in a neoclassical building of the former Panarcadic hospital "Evangelistria", which was founded during the years 1895-1905. The building was designed by Ernst Ziller. The archaeological museum was established by the Ephor of Antiquities, Dr. Theodoros Spyropoulos, during the years 1980-1986 and was inaugurated by the then Minister of Culture Melina Merkouri.
The museum houses about 7.000 findings, coming mostly from recent excavations in Arcadia. It is administrative centre of the archaeological services of the prefecture and it also has a cultural and educational role.

The most important items of the museum are:
Clay idols of neolithic date from Sakovouni Kamenitsas Gortynias.
Male and female idols in the well known forms, but also others that present originality in poses and themes.
Stirrup jar of Late Mycenaean date (12th century B.C.) from Palaiokastro Gortynias. Nice specimen of vase manufacture and decoration techniques of a local Mycenaean workshop.
Small stirrup jars of Late Mycenaean date (12th centurey B.C.) from Palaiokastro Gortynias. They are decorated with octapuses.
Clay akroterion of Laconic type with gorgoneion head from the pediment of the temple of Hippios Poseidon in Mantineia. It is dated to the Archaic period.
Headless marble statue of sitted goddess (Athena) from Asea. Work dated to 510 B.C., and probably executed by the Athenian sculptor Endoios.
Bronze helmet of early Hellenistic date from Megalopolis. There is only one parallel at the British Museum. It comes from Euphratis and is connected with the expeditions of Alexander the Great.
Votive relief with representation of Kybele, together with her priestesses and worshippers. From the villa of Herodes Atticus in Eva. Pentelic marble, 4th century B.C.
Tondo with representation of Hercules and Auge in relief. Diameter: 80cm. Late Hellenistic decorative relief from the Villa of Herodes Atticus in Eva Kynourias.
Slab with representation of the nine Muses and Apollo. Original Hellenistic work of the 2nd century B.C . Neo-attic relief from the Villa of Herodes Atticus in Eva Kynourias. 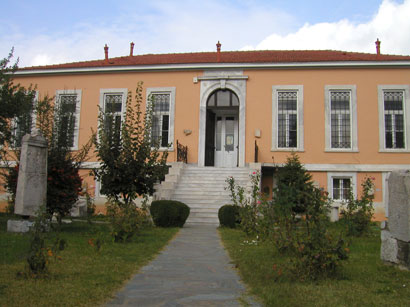 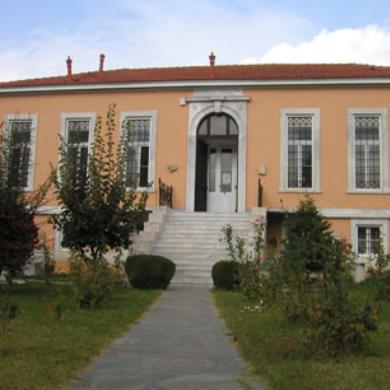 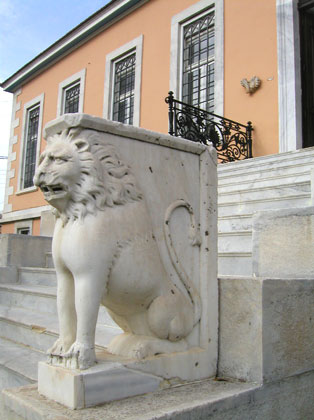 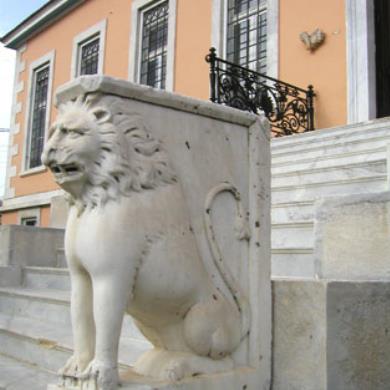 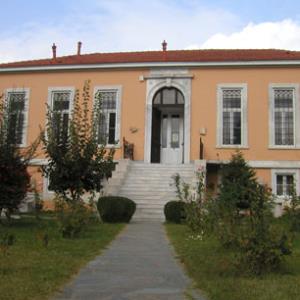 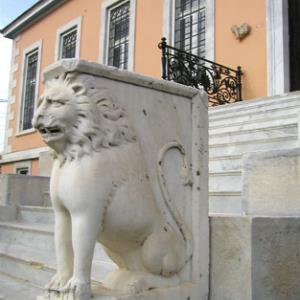