The Palaikastro Kouros in the Sitia Museum

The Archaeological Museum of Siteia contains the most important finds from eastern Crete. Apart from the exhibition halls, the museum has storerooms and workshops, as well as offices for scholars and the staff. The explanatory labels of the exhibited finds are written in five languages. The museum opened to the public in 1984.
The items are exhibited in chronological groups, with explanatory details for each period. The most representative of them are:
- Gold and ivory statue (kouros) from the Minoan town of Palaikastro in Seteia. It is 0.50m. high and has been restored from many small pieces. Dated to the Late Minoan IB period.
- Rhyton (libation vessel) in the shape of a bull, with painted decoration. It was found in the excavations of the Minoan site on the islet of Mochlos.
- Stirrup jar from the Minoan settlement on the islet of Pseira. It bears exquisite marine style decoration (nautilus) and dates from the Late Minoan period.
- Pithoid jar from the Palace at Zakros. It bears wonderful painted decoration and dates to the Late Minoan period.
- Geometric amphora from the cemetery of Aghios Georgios. The painted decoration consists of bands and concentric circles.
- Terracotta figurine of a woman, of the type known as the "Tanagraia". It was found in the Hellenistic city of Zarokambos.
- Black figure kantharos with "west slope" decoration. It was found in the Hellenistic city of Zarokambos.
- Clay plaques of the Daedalic type, from a deposit in the city of Seteia. They are decorated with relief human figures on a chariot, depicting possibly Pluto and Persephone.
- Linear A clay tablets from the archives room of the Palace at Zakros.
- Base with a funerary epigram on both sides, referring to the death of Leon and his son, Thenas. From the important Cretan city of Itanos. 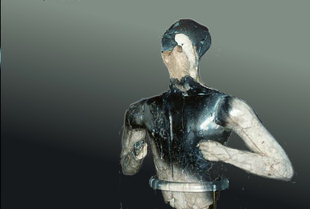 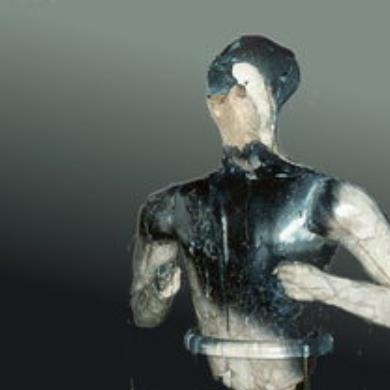