Archaeological site
Address: 25001 LOUSSES , KALAVRYTA , GREECE
Ancient Lousoi (province of Achaia, Peloponnese), is located on the slopes of the high valley of Sudena near Kalavrita at an alitude of ca. 1200 m. above sea level, and in antiquity belonged to the region of Arcadia.
After the discovery of the sanctuary of Artemis Hemera in Lousoi by W. Dorpfeld and A. Wilhelm in 1897, the sister-institute of the Austrian Archaeological Institute (OAI) in Athens carried out the first excavations in three campaigns during 1898 and 1899, under the direction of W. Reichel and A. Wilhelm.
In the sanctuary which extended over two terraced areas, the foundations of numerous structures were nearly completely exposed, structures which exemplify the necessary infrastructure of a small rural sanctuary of the 3rd century B.C. The central building of the sanctuary, the temple of Artemis, was located on the southern terrace, the higher one; its noteworthy groundplan consists of a central naos and colonnades connected at the sides. Constructions on the slightly lower northern terrace accompanied the road to the sanctuary, and according to the interpretation of the excavators included a fountain house, a "propylon" (gateway) and a "bouleuterion" (council building). The rapid publication of the architectural elements, as well as the finds, which include votives connected to the cult of Artemis represents even today the primary focus of research at the sanctuary.
As part of the excavations, which were renewed in 1980 under the direction of V. Mitsopoulos-Leon and which continue to date, a survey of the architectural remains of the extensive settlement area visible in the region has been undertaken (F. Glaser). To this end, systematic field research has concentrated on excavations in the sanctuary of Artemis and on the uncovering of domestic housing in the region of Phournoi, as well as on the measurement of the remains of public structures in the area called "stadion".
In the sanctuary, the finds recovered from undisturbed stratigraphic layers reveal the early phase of the cult of Artemis. From the analysis of the broad spectrum of votive gifts such as bronze jewellery, small figural bronzes and terracottas, lead and bone votives (V. Mitsopoulos-Leon, Ch. Schauer), pyxides for the cult and miniature vessels (Ch. Schauer), it is clear that, for the late geometric and archaic periods, this sanctuary played a leading transregional role, when seen against the back of similar sacral places. The discovery of the so-called East Building expands the picture of the architectural layout of the temple terrace, and points to a possible predecessor of the 4th c. B.C. The complete clearing of the temple foundations and the search for architectural elements enable to a great extent the reconstruction and classification of this building from the turn of the 4th-3rd century B.C. or slightly afterwards. The structure, which consists of a marble architectural order at the front and in the cella, is divided into a naos, consisting of pronaos, cella and adyton, and into lateral colonnades at the sides, comprising a unique solution for a sacred building (G. Ladstatter).
With the excavated remains of two houses from the area of Phournoi, extending over two terraces, the hellenistic domestic culture of Lousoi can be clarified. Neither the eastern peristyle house, which probably represents an adaptation of one or more earlier structures, nor the simpler house to the west, embody canonical groundplans. Furthermore, the room inventories, with their klinai, bath tubs, and hearths, indicate a relatively elevated standard of living. The troughs for wine production located near the domestic area, the evidence for the working of bones and of ceramic production, as well as storage rooms, point to predominantly agrarian resources as the economic basis of the people of Lousoi. From a rebuilding, incorporating numerous stretches of walls, which occurred after the houses were destroyed all at once probably in the 1st cent. A.D., it can be seen that the area continued to be used until the late Imperial period.
The preliminary results of a survey in the region called "stadion" point to a monumental public building in this area. The foundations of a two-aisled stoa, further traces of walls arranged in a rectangular ground plan, as well as massive worked ashlar blocks suggest that the remains of a hellenistic civic square should be identified here.
From this research, beginning with the development of the sanctuary in the late 8th century B.C., followed by a hellenistic civic settlement covering an extensive built up area and with the outgoing use of the site in the late Roman period, important stages of the historical development of the settlement of Lousoi can be recognised.
The foundations of the Artemis sanctuary and the groundplans of the houses are visible high above the valley in an impressive location. Until the construction of a museum at the site, the most important finds are kept in the Ephorate in Patras. 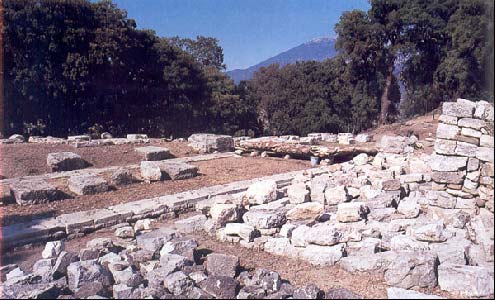 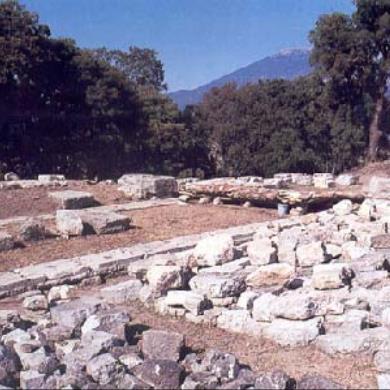 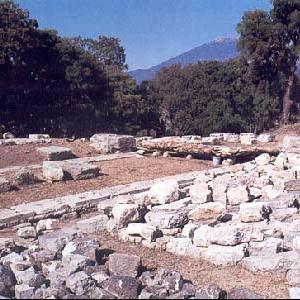