The ancient town of Edessa was built on a natural passage. There, the age-long road axis was renamed to VIA EGNATIA since the 2nd century B.C. The ancient town in the plain of Loggos was gradually abandoned and habitation occurred in the upper town in the mountainous Macedonia. This choice was made because of the waters which were a perfect defensive system and offered fortification.
The oldest finds are from the Neolithic times but the most are from the copper age and mainly from the iron age. In the 6th - 5th century B.C. ancient Edessa developed in two levels : the Upper town or Acropolis and the lower town on Loggos. Nowadays after the excavation parts of the ancient walls parts of buildings of the Acropolis can be seen as well as the old tombs of various types which are in the lower town. After 168 B.C. and the conquest by the Romans the town knows prosperity and has its own mintages made which show the participation of the town in the retention of the road axis Via Egnatia. A large number of inscriptions ensure the existence of parliament, a high school, as well as the temple of Dionysus Pseudanor also the temple dedicated to Goddess Ma, the mother of Gods, other monuments show the worship of Goddess Artemis and the Phrygian God Savazios.
During the second half of the 3rd century A.D. the town suffered of numerous raids by Goths. This led to a quick reparation of the ancient wall in order to make the town more secure.
The inhabitants used buildings material which they took from the neighboring tomb. Among these is also the anaglyph of ‘the Hog’ that reportedly passed together with his master the Via Egnatia from Dirachio to Edessa to take part in the great Macedonian feast of the Phallocrats ( dedicated to God Dionysus ) During Christian times was the wall strengthened with a new fortified line in a distance of 6 km next to the old one. In the end of the 6th beginning of the 7th century the inhabitants gradually abandon the lower town and inhabitation occurs in the Acropolis which develops into a Byzantine fortress.
The most important monuments of the area are:
The South gate: made with the early fortress art which is described in ancient handbooks.
The monumental marble-paved road which crossed the town, columns of marble and built pessaries can be seen at each side. One of the columns there are many inscriptions of independence.
The fortress of Edessa is one of the best preserved in Macedonia. It was constructed in 300 B.C. and repetedly repaired. The Acropolis was fortified by a wall, which now survives to a height of 6m. Parts of it can be seen through windows beneath apartment buildings.
This text is cited June 2003 from the Municipality of Edessa URL below, which contains images. 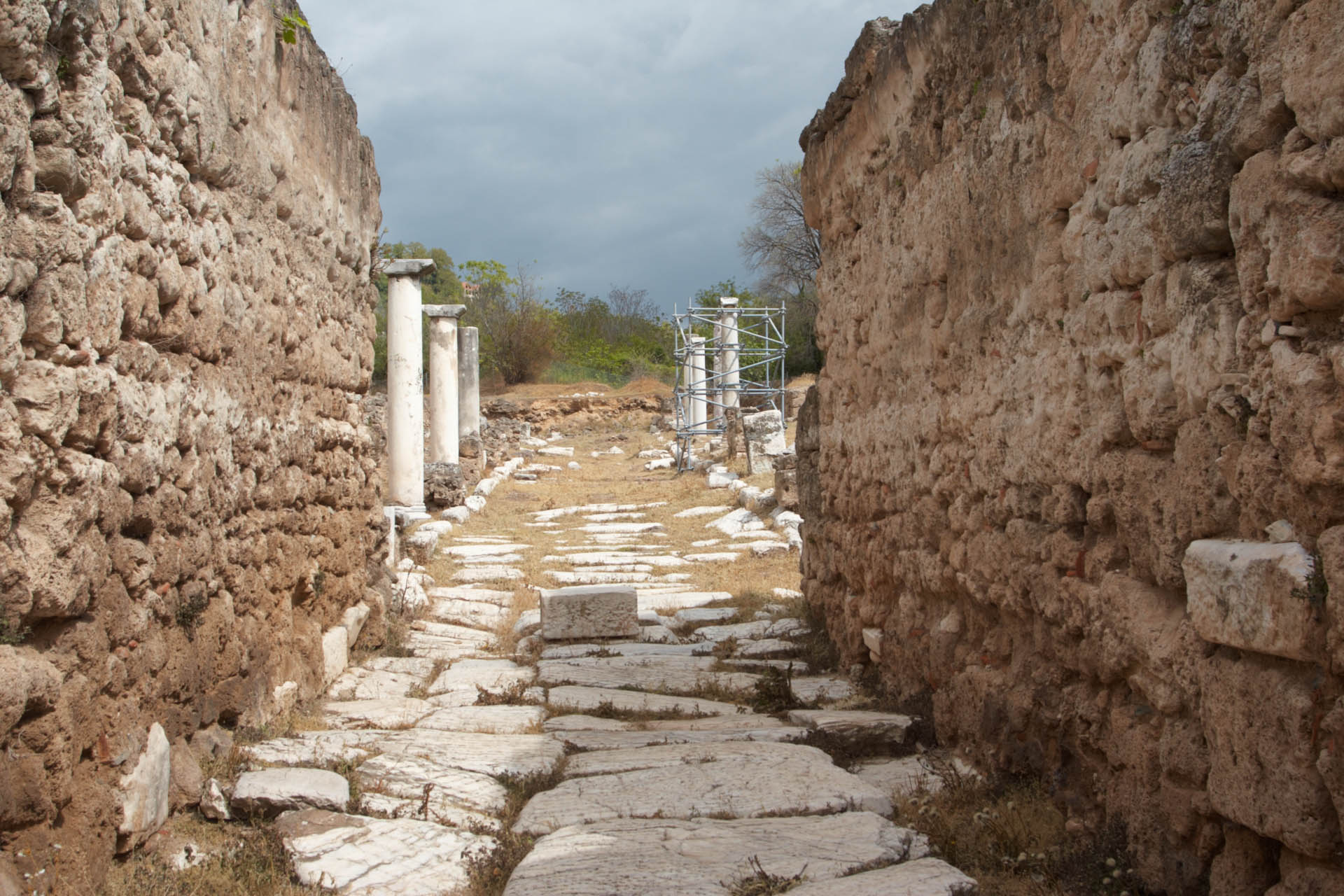