The Church of St. Titus. It is a cross - shaped three - aisled basilica with cupola.The church was built with rectangular hewn stones and is dated in the 7th century AD.

Gortyna was first inhabited at the end of the Neolithic period (3000 BC) and by the Late Minoan period (1600-1100 BC) it became a flourishing settlement. Remains of the Archaic period (7th century BC) were located in the area of the Acropolis, while the large inscription, the Gortyn Law Code, dated to the 5th century BC, attests the prosperity of the city, which continued throughout the historical times. However Gortyna reached its peak during the Roman era (1st - 5th centuries AD), as an ally of Rome and the capital of the Roman provinces of Crete and Cyrene.   The city remained an important center of Crete in the following Early Byzantine period and, according to tradition, it was the first Cretan city which espoused Christianity. Gortyna became the seat of the first bishop of Crete, Apostle Titus, to whom was dedicated a monumental temple. The conquest of Crete by the Arabs put an end to the history of the ancient Gortyna, which was destroyed in 824 AD.
The first archaeological research on the site was conducted in 1884 by the Italian archaeologist F. Halbherr. Since then, excavations have been carried out by the Italian Archaeological School and the local Archaeological Service.

The most important monuments of the site are:
- The Odeion. It is a typical Roman theatre of the 1st century AD with two entrances on the north side and an almost semicircular orchestra. The north wall of the formerly raised skene (stage) had four niches for statues. Only three rows of the cavea benches are preserved.
- The Gortyna Law Code. The inscription with the Code is to be seen in the north round wall of the Odeion, sheltered in a small structure. It is a complete code of law, based on Minoan tradition, which survives in the Doric city of the historical times. Dated to 450 BC.
- Isieion. The sanctuary of the Egyptian Divinities (1st-2nd centuries AD) is a rectangular area dedicated to the cult of many gods, such as Isis, Serapis-Zeus and Anubis-Hermes. It had an underground cistern. The cult statues of the gods stood on an oblong podium with crepis.
- Temple of Apollo Pythios. It was built in the Archaic period (7th century BC) and originally was a rectangular house with a treasury. In the following, Hellenistic and Roman periods (4th century BC-2nd century AD) several additions were made to the building, including the prodomos, the colonnades, and a conch which sheltered the statue of Pythios Apollo.
- The Praetorium was the seat and residence of the proconsul of Crete. It is divided into two parts: the administrative section, in which the central building is the basilica, and the residential section. The preserved ruins are dated to the 2nd century AD and seem to have been repaired in the 4th century AD.
- The northeastern cistern and the Nymphaeum. They lie immediately to the north of the Praetorium. The first cistern was a rectangular, open-air structure with conches on all sides, where the statues of Nymphs were placed. It was converted into a vaulted cistern in the 7th century AD.
- The Acropolis on the hill of Aghios Ioannes. Large sections of a polygonal fortification wall are preserved with towers at the corners (10th-6th centuries BC). Within the enclosed area there was an Archaic temple, on the ruins of which an Early Christian basilica was later erected.
- The Church of St. Titus. It is a cross - shaped three - aisled basilica with cupola; the northern and the southern arm of the cross end up in conchs. The church was built with rectangular hewn stones and is dated in the 7th century AD. It was destroyed by the Arabs in 824 AD and rebuilt after the recapture of Crete by the Byzantines during the 10th century.
- Triconch church founded probably over the tomb of the Ten Cretan Martyrs. The narthex communicates through a tribelon with the central rectangular part of the church. The mosaic floor and the remaining capitals are exquisite. The church is dated in the 5th century AD. 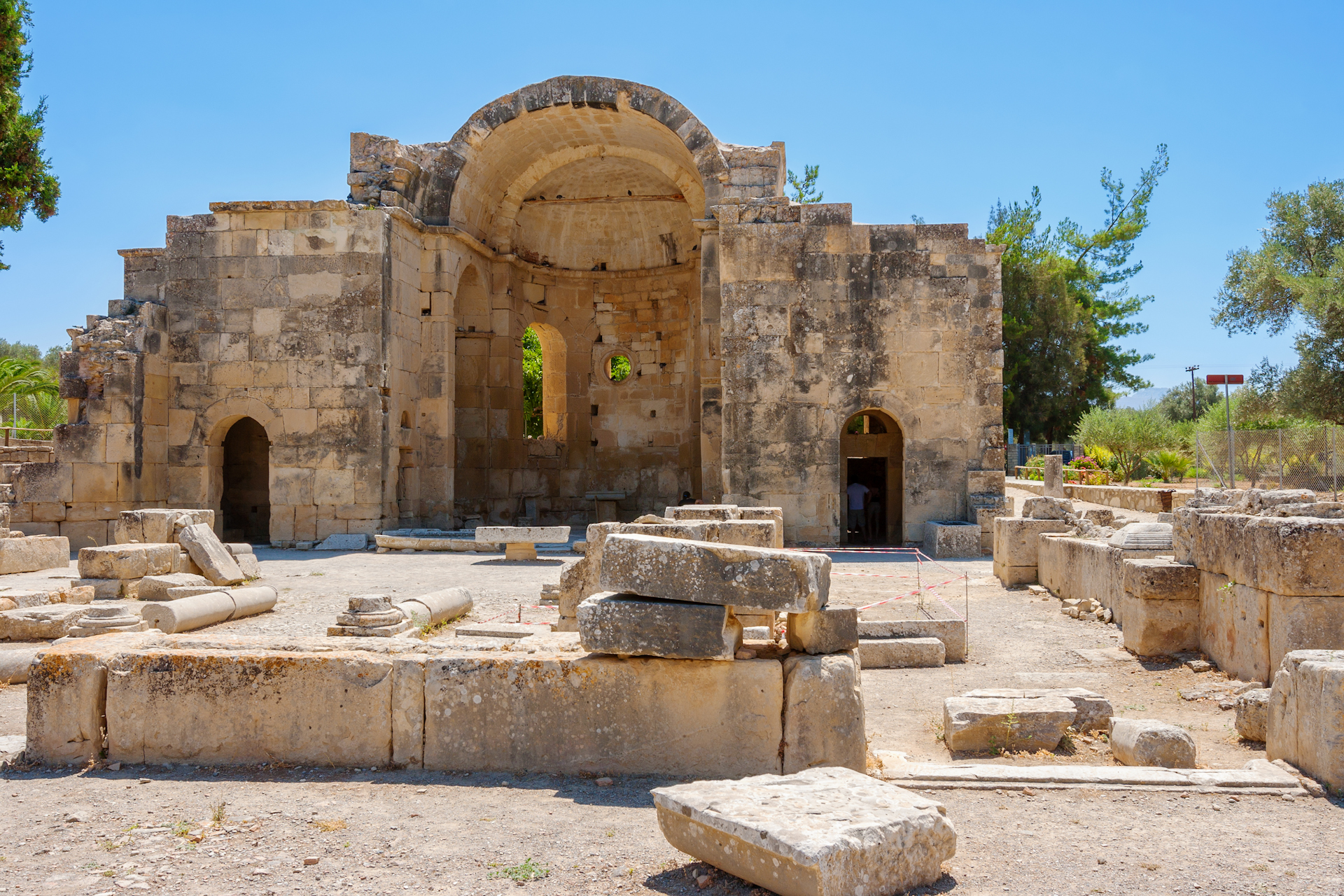 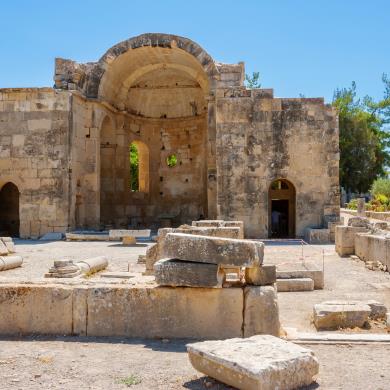 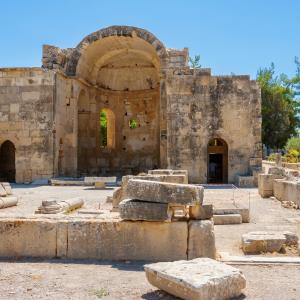