The Archaeological Museum of Naxos is housed in a historical building, which is an impressive example of the architecture developed on Naxos during the period of the Frankish rule (13th - 16th centuries AD). It is a five-storey structure built on the course of the Frankish fortification walls, incorporating two of its towers. It was designed to house a school of Jesuits, founded in the 17th century, while in the late 19th - early 20th century it housed the famous commercial school of the island; among its pupils was Nikos Kazantzakis. It was later made over to the Archaeological Service and has been used to house the Museum since 1973.
The Archaeological Museum of Naxos includes works of art and objects of every day use dating from the Late Neolithic period to the Early Christian times (5300 BC - 5th century AD). These finds came to light in the course of the excavations conducted on the island since the Second World War.
Naxos is the largest and most important of the Cyclades, a rich island with a natural environment suitable for the development of farming and stock-raising. It is also an island with good natural harbors, a circumstance which has contributed much to its strong continuous cultural presence in Greece from the end of the 4th millennium BC to the present day.
Naxos first flourished during Early Cycladic II period (about 2700 - 2300 BC), during which, along with the small nearby islets, it evolved into one of the most important commercial and cultural centres of the period. During the later phases of the Bronze Age, there were various changes and upheavals in the Aegean which resulted in new centres rising to prominence on other islands (Thera, Milos, Paros), while Naxos lost its leading position in the Aegean.
Excavations over the last forty years have brought to light a large number of sites dated from the Early Cycladic period (3200 -2300 BC) and even earlier: Grotta, Aplomata, Pithos in Chora, Melanes, Sangri, Iria, Tsikalario in central Naxos, Panormos, Korphi t'Aroniou in east Naxos; all these settlements yielded a rich amount of finds, that are now housed in the Naxos Museum.
The archaeological collections of the Museum include artefacts, many of which are unique. The collection of Early Cycladic marble figurines is second only to that of the National Archaeological Museum in Athens, and there are also some very fine collections of Mycenaean (late 2nd millennium BC) and Geometric (9th - 8th centuries BC) pottery. The Archaic (7th - 6th centuries BC), Classical (5th - 4th centuries BC) and Hellenistic (3rd - 1st centuries BC) periods are represented by characteristic examples of pottery and terracotta figurines. The Roman period (1st century BC - 2nd century AD) has yielded not only pottery but also a large, highly interesting collection of glass vases. The museum also houses a small, but important collection of Archaic sculptural works.
Some of the most important exhibits of the Museum are:
- Clay rhyton (ritual vase for libations) of animal shape. Dated to the Early Cycladic period (3200-2300 BC).
- Marble vase. Dated to the Early Cycladic period (3200-2300 BC).
- Early cycladic vases from the island of Epano Koufonisi (first half of the 3rd millennium BC).
- Early Cycladic vases decorated with incised decoration from the islands of Epano and Kato Koufonisi (3200-2300 BC).
- Early Cycladic pyxis of marble and schist from the cemetery at Aplomata (2800-2300 BC).
- Early Cycladic marble figurine from Keros (2800-2300 BC).
- Mycenaean stirrup jar from the chamber tomb cemetery at Aplomata decorated after the "octopus style" (12th century BC).
- Mycenaean strainer hydria (jug) from the chamber tomb cemetery at Kamini decorated with a scene of circular dance (12th century BC).
- Four gold plaques from a rich child burial at the cemetery at Kamini depicting the dead child. Dated to the Late Mycenaean period (12th century BC).
- Geometric amphora dated to the first half of the 8th century BC.
- Gold jewellery from cist tombs at Tsikalario and Chora dated to the Geometric period (9th-8th centuries BC).
- Torso of a naxian kouros. Dated to the second half of the 6th century BC.
- Detail of a mosaic floor from Aplomata depicting a Nereid on a bull. Dated to the Roman period. 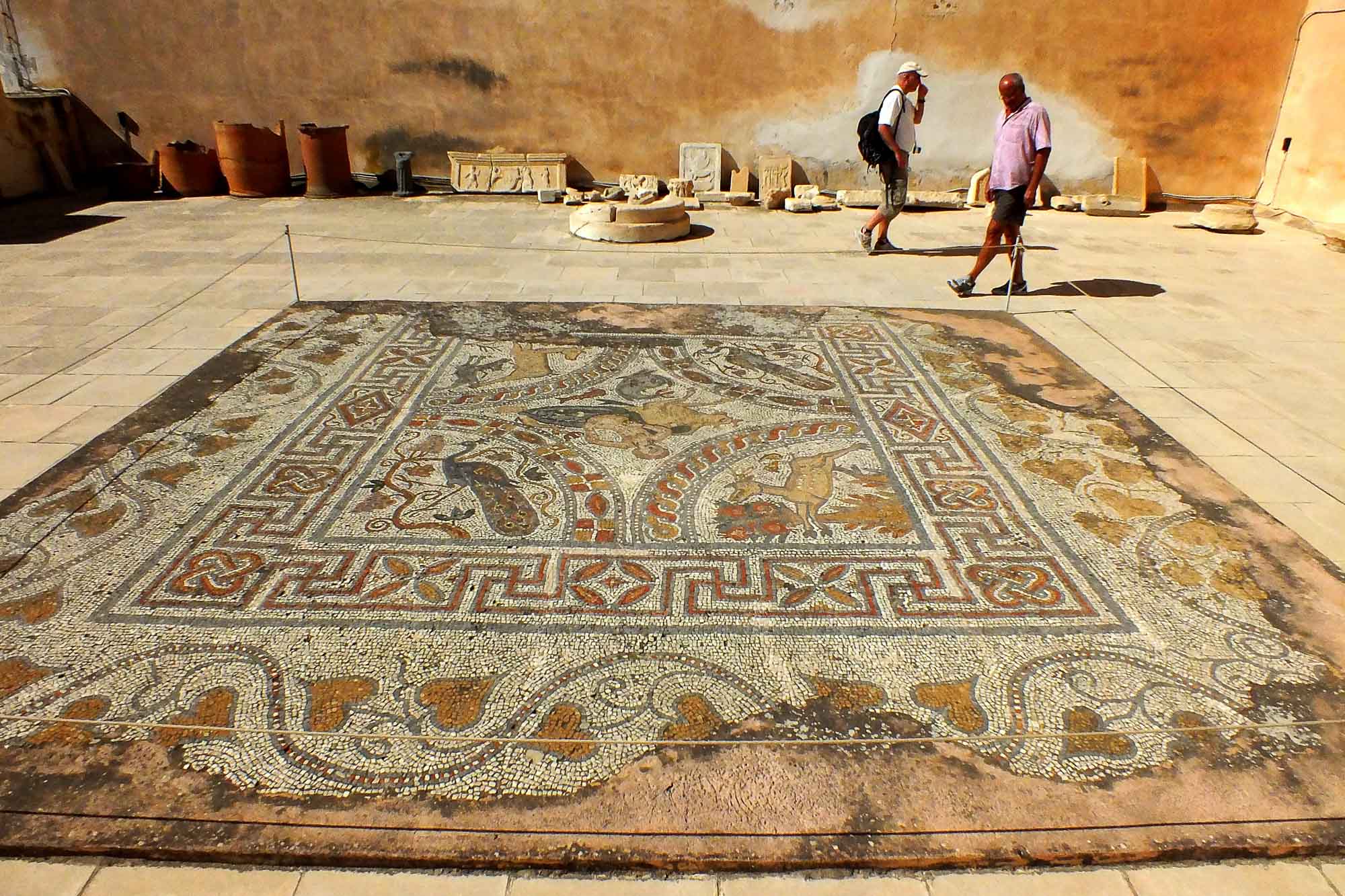 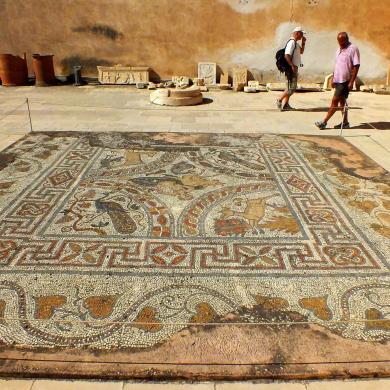 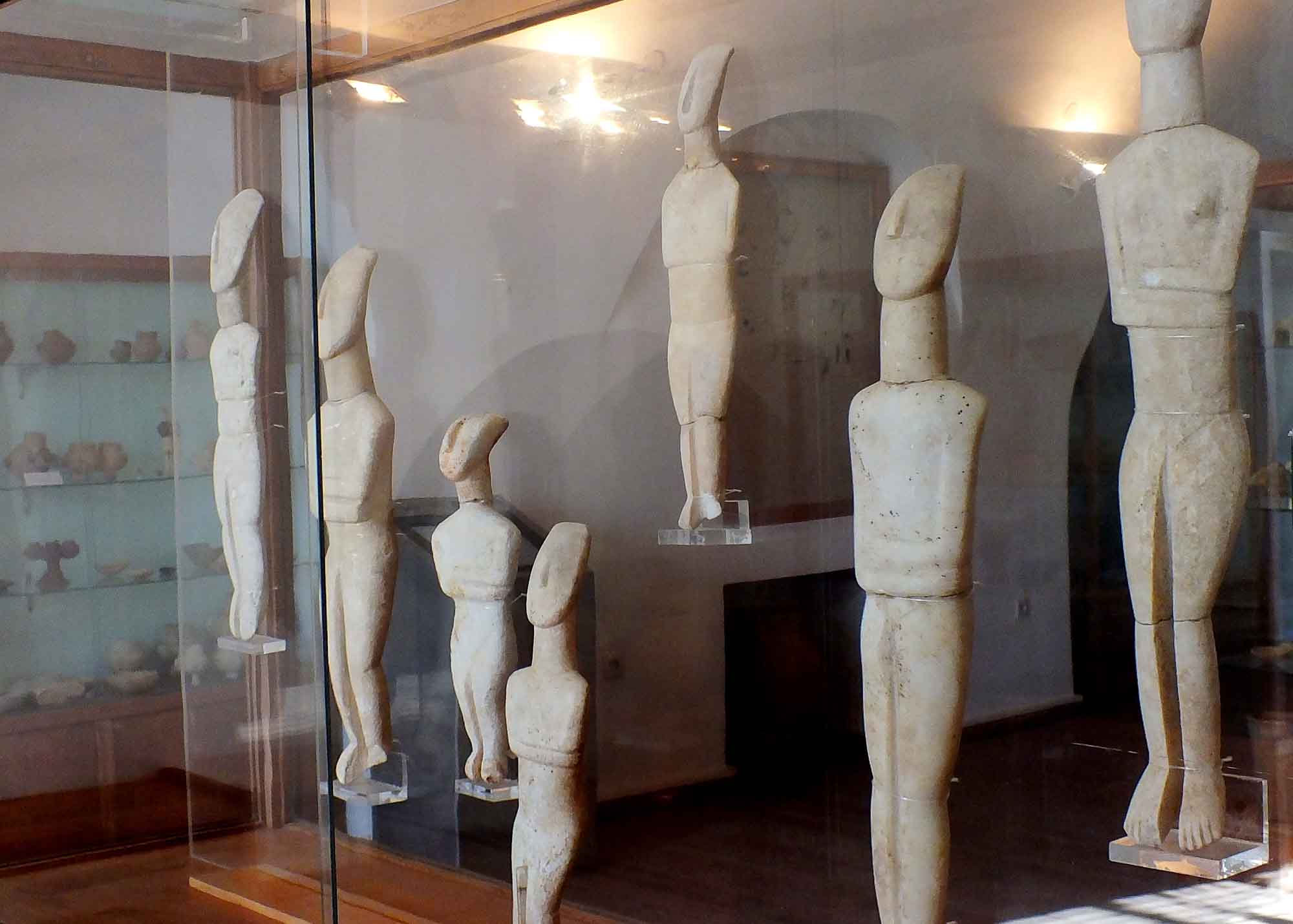 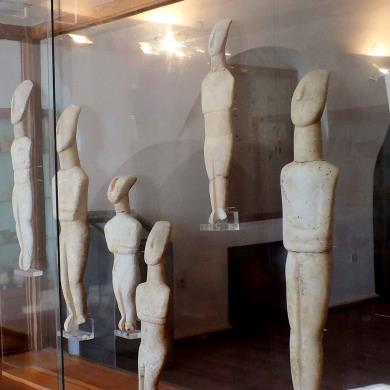 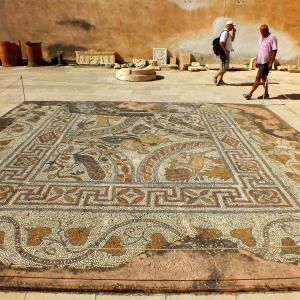 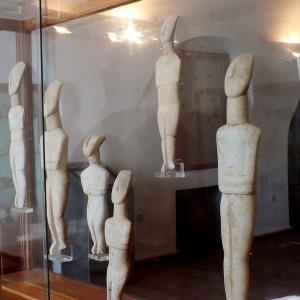