Frieze with bulls from the Arsinoe Tholos

Dancer's Frieze from the Temenos

Griffins devouring a stag. Anta capital from the Propylon of Ptolemy II.

The museum was designed by the architect Stuart M. Shaw, of the Metropolitan Museum of Art in New York, and built by the American School of Classical Studies at Athens in the years 1939-1955. The north wing was added later, in 1960-61.
The museum houses the finds from the adjacent Sanctuary of the Great Gods, as well as from the ancient city and necropolis of Samothrace. The exhibition area includes four halls and an atrium which include:
• Room A: the reconstructed architectural parts from the buildings of the sanctuary
• Room B: restored architectural parts, sculptures and coins found in the sanctuary
• Room C: sculpture, miniature objects, and pottery from the sanctuary and the ancient city
• Room D: finds from the cemeteries
• Atrium: collection of inscriptions

The most important exhibits of the museum are:
- Sub-Geometric kantharoi. They were found in a deposit in the area of the former Temenos. Dated to the first half of the 7th century B.C.
- Panathenaic amhora. On the front side it bears a representation of a foot race and on the back the figure of the armed goddess Athena. The vase is attributed to the Euphiletos painter or his workshop. Dated to ca. 525 B.C.
- Black-figure pelike with a representation of a wine pressing and tasting scene, with Heracles and Dionysos participating. The vase is attributed to the Eucharides painter. Dated to ca. 500-490 B.C.
- Persian gold pin. It has the shape of a lion and is dated to the period of the Achaemenid Dynasty (5th century B.C.).
- Parts of the marble frieze bearing relief figures of dancers, from the former Temenos. Dated to ca. 340 B.C.
- Fragment of a coffer from the ceiling of the Temenos. It may be a work of the sculptor Scopas. Dated to ca. 340 B.C.
- Anta capital. It comes from the west stoa of the Propylon of Ptolemy II and bears a relief representation of griffins devouring a stag. Dated to 285-281 B.C.
- Parts of the reconstructed stoa and the reliefs from the Tholos of Arsinoe. Dated to 288-281 B.C.
- Bilingual marble stele from the Anaktoron. It forbade entry to the adyton of those who were not initiated. Dated to the 1st century A.D.
- Copy of the famous winged Nike (Victory) of Samothrace. The statue was discovered in 1863 by the then Consul of France in the Adriatic C. Champoiseau, who transferred it directly to the Louvre, where this masterpiece of the ancient Greek art is exhibited to date. 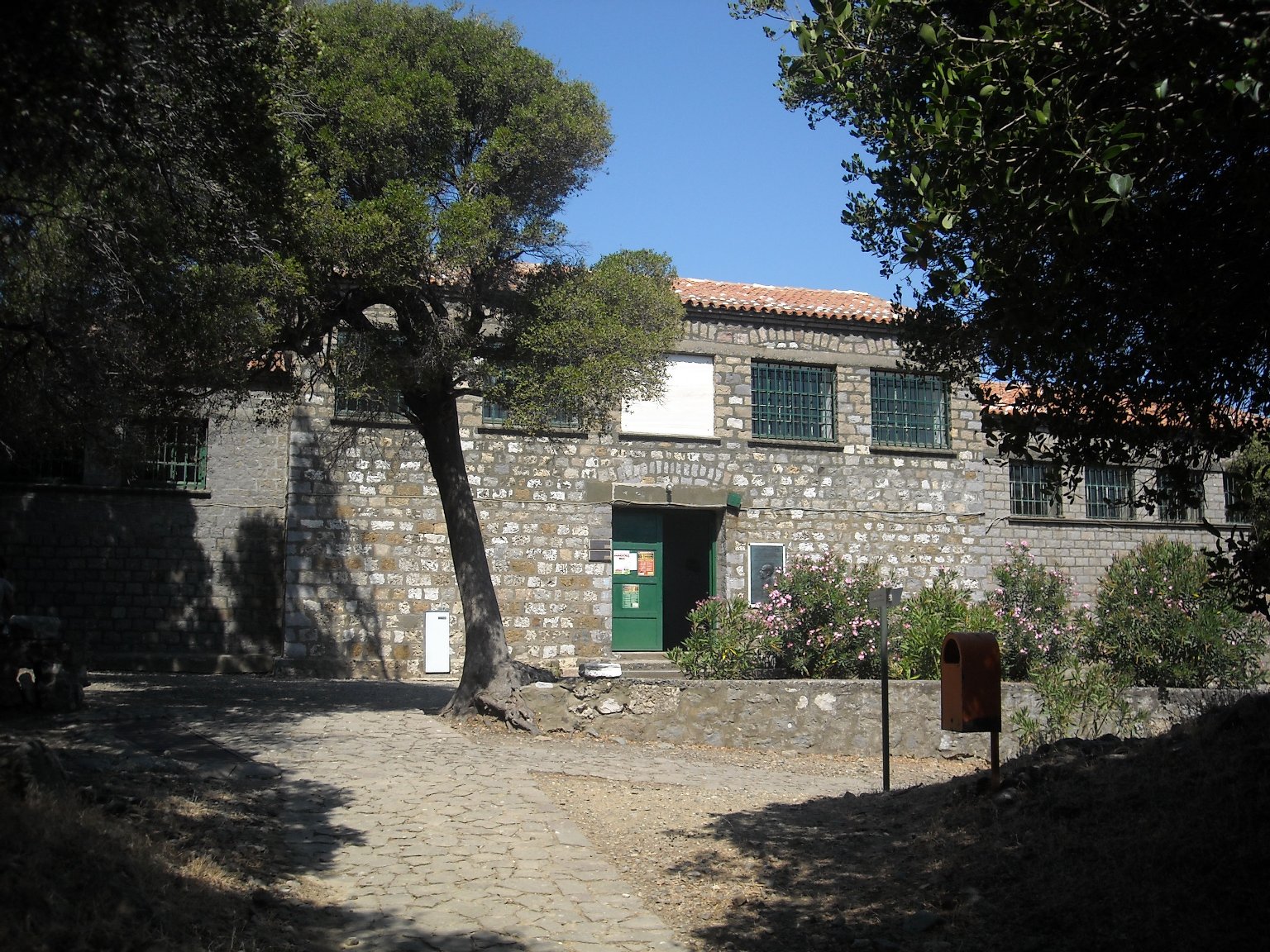 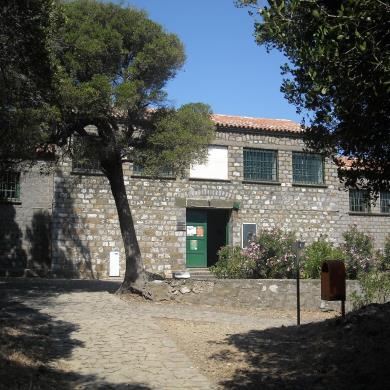 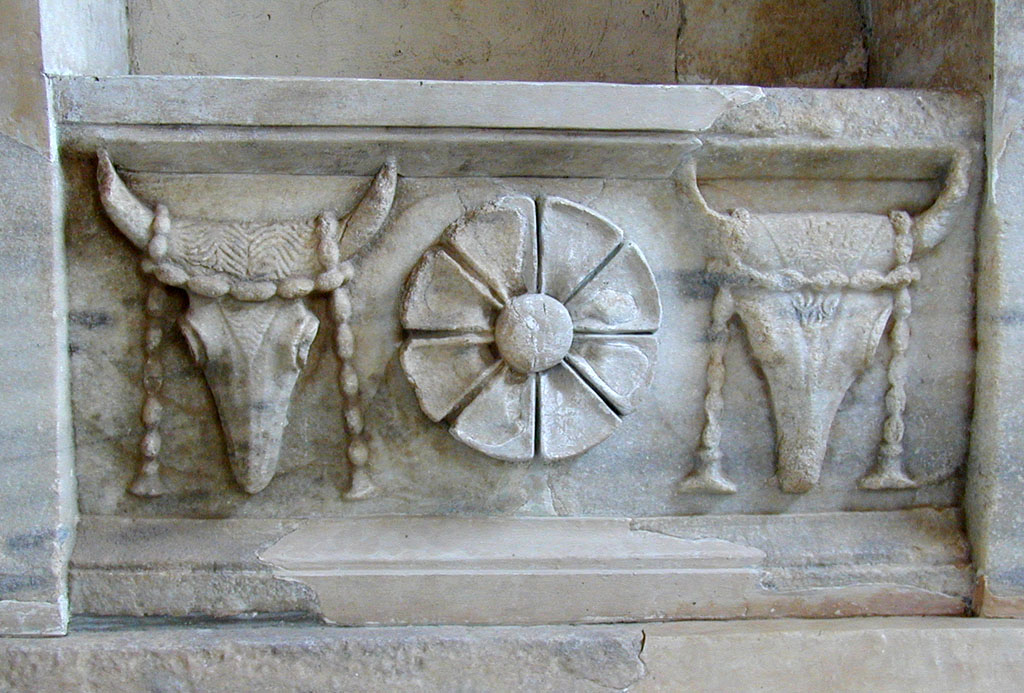 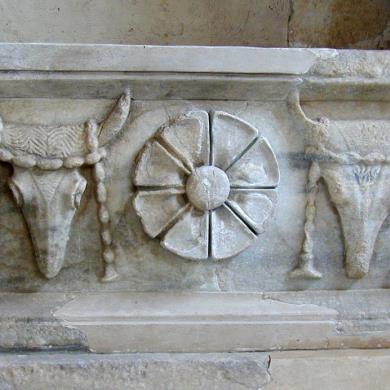 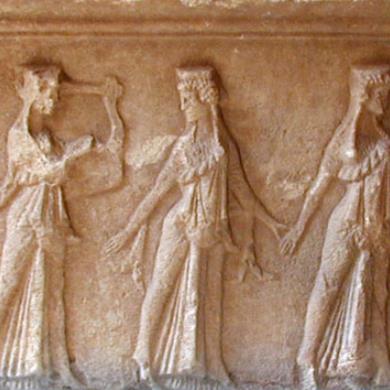 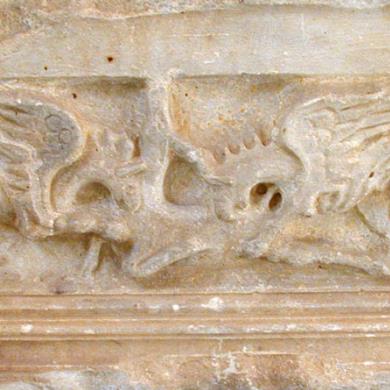 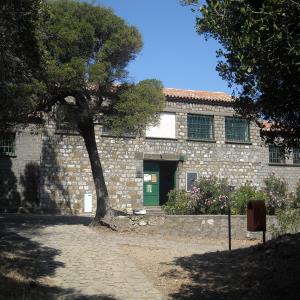 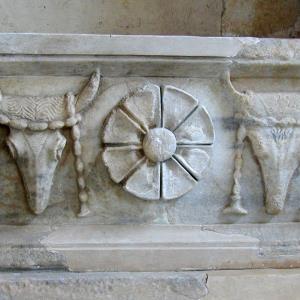 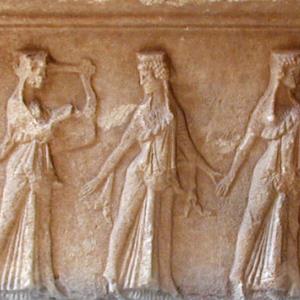 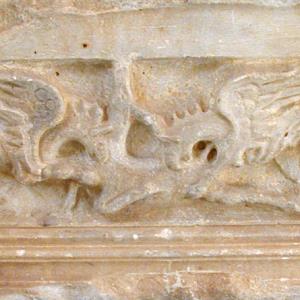