Ministry of Culture and Tourism

The museum was constructed between 1967-1968, in a plot donated by the Koryzis family (Alexandros Koryzis was Prime Minister of Greece in 1941).
The museum houses finds from the excavations of the Swedish Archaeological Institute at the sanctuary of Poseidon in Kalavreia, from the older excavations of the French Archaeological School at the sanctuary of Aphrodite Akraia in Troezena, and antiquities from Methana, Hermioni and the wider region of Troezinia.
The museum collections include:
• Grave and architectural sculptures, inscriptions and architectural parts, such as capitals and roof tiles, that cover a time span from the Archaic to the Early Christian periods.
• Clay artefacts - mainly pottery and figurines - dated from the Protogeometric to the Roman periods.
• Finds of the Mycenaean period - mainly pottery, figurines and ornaments - from the vaulted tombs of Galatas and the mycenaean shrine of Ag. Konstantinos at Methana, as well as mycenaean pottery from the rocky islet of Modi.
The most important exhibits of the museum are:
- Geometric amphoras, found at Troezena.
- Idiomorfic ionic capital from the sanctuary of Poseidon.
- Clay hydrorroe. It has the shape of a lion's head and comes from the sanctuary of Aphrodite Acraia in Troezena.
- Inscribed pedestal base of a bronze statue of the emperor Marcus Aurelius, found at Methana.
- Bronze vessels, offerings to the sanctuary of Poseidon.
- Clay figurine of a horseman (1300-1200 BC) from the Mycenaean sanctuary of Ag. Konstantinos at Methana. 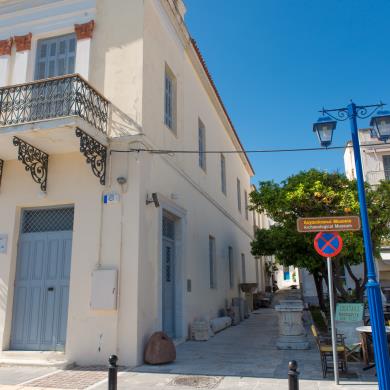 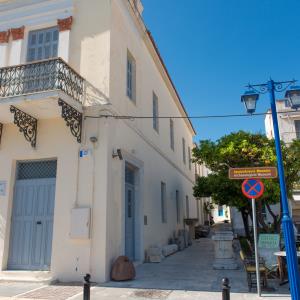