Panoramic view of the village

Municipality's district consul
Address: 34005 KECHRIES , CHALKIDA , GREECE
Tel.: +30 22270 92400
Kechries could be characterized as a junction connecting the eastern with the western coasts of Evia, establishing, thus, ideal conditions for anyone who wishes to spend his vacations there, combining the green forests of the village with the freedom of choice among the coasts of Aegean or Evoic Seas.
Traditions and legends have combined the history of the small fountain, found in the situation where the medieval village, so called Ligdia, and the passing from there of the legendary knight, Erotocritos.
The area, which during the times of Turkish occupation was a Kara-Ali's estate, was assigned, after the liberation, to the hands of the resolution fighter, Angelos Tombazis. Then, after a decision of the Greek Government in 1925 it was assigned to the landless farmers of the area.
Similar but at the same time, parallel to the history of Kechries, is also the history of Daphne co-existing with the village of Kechries. It should be noticed that in old times Daphne was called "Mantanika" originated from the word "mantani" probably meaning the high production.
This text is cited May 2003 from the Municipality of Elymnies tourist pamphlet. 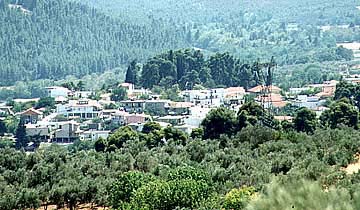