A sacred place of the Aegean with uninterrupted life and function from the 14th century BC up to our times. It is the cradle of the Ionic order of the monumental Greek architecture. The sancturay of Iria has been located (1982), investigated (1986-1996) and presented to the public (1992-1996) by the University of Athens in collaboration with the Polytechnical School of Munich, with the financial support of both Univesities as well as the Ministry of Culture (research) and the Ministry of Aegean (presentation).
The religious function of the Iria sanctuary at Livadhi dates back to the prehistoric times (1300 BC) and the use of the site for religious purposes continues, uninterrupted, until today. Its importance is attested not only by splendid architectural finds, but also by the numerous votive offerings dedicated to the deity worshipped in the sanctuary during all its long history, but especially during the earlier periods.
The importance of the buildings discovered at Iria is so great that scientific discussion on the subject has taken a central place in international archaeological bibliography and in handbooks on ancient architecture.
The worship on the site has had a brilliantly testified and uninterrupted sequence (worship of Dionysos in antiquity and of the relative St. George later on). This sequence supports in a vivid way all other evidence that bears witness to a cultural continuity at Naxos, since 1500 BC onwards.
An open-air cult, that lasted from the Mycenaean times (1300 - 1100 BC) until the Middle-Geometric II period (800-750 BC) was succeeded at Iria by a worship housed in four superimposed buildings, found in successive layers, at exactly the same site and with the same orientation.
The first temple was built around 800 BC and it consisted of a single room constructed of wood and bricks. A probable flooding of the nearby river Byblines (today known as the Peritses) destroyed this first building. Around 730 BC it was replaced by a hall intended for mysteryrites, with four aisles defined by colonnades. Around the walls were benches for the worshippers.
After the destruction, for unknown reasons, of the second temple, a third one was erected in c. 680 BC, at the same site, using part of the earlier walls. This had three aisles and an early form of tetrastyle portico. This too was short-lived. Around the end of the 7th century BC, the cult was again carried out in the open-air, the focus being a four-sided clay hearth. It was found practically intact, and it is visible beneath the marble threshold of the later adyton.
Around 580-570 BC, work began on the fourth and largest temple of all, the only one of which remains are visible, and the only one to have been restored. It is an archaic hekatompedon temple of the Ionic style. It is built of local granο-diorite rock, and it has an adyton (for a mystery cult), marble portico (prostasis) with columns forming a monumental entrance, and a marble altar. Τwο tetrastyle marble colonnades divide the building into three aisles.
The instability of the subsoil and the fact that the builders had as yet little experience in setting the foundations for such a big temple, necessitated repairs on a vast scale during Roman times (1st century BC). During the 5th century AD, the temple was converted into an Early Christian basilica. The foundation of the little Byzantine church of St. George in the immediate vicinity of the ancient temple has ensured the continuity of worship in this same place for 3,300 years.
In late antiquity the sanctuary was surrounded by a spacious rectangular enclosure wall (temenos), measuring at least 70 Χ 58 m. which on the west incorporated a stoa-like construction (two square rooms with a stoa in front of the entrance).
The excavation has shown that this is a ceremonial dining-hall (a building for communal feasting during the festival). The earlier, apsidal building phase of the dining-hall goes back to the early archaic period (7th century BC). In the classical phase (4th century BC) it could accommodate at least eighteen distinguished people who dined reclining on couches, while the rest of the worshippers dined in the open-air. The entire area produced a plentiful amount of pottery, both cooking and table-ware.
Research had already shown that Naxos played a leading role in the development not only of sculpture but also of architecture. Yet the first steps in the creation of an lonic monumental style remained unknown. The second temple of Iria provides evidence as early as the 8th century BC for the first known monumental arrangement of the interior with a four-aisled hypostyle temple hall, astonishing for its time. The third temple provides first hand evidence for the existence of a wooden prostyle portico, the fore-runner of the columnar facade of archaic temples. The fourth temple, datable to 580-550 BC, provides the earliest example of Ionic prostyle temple in marble. It is at this temple that the, until recently, unknown primary steps of the monumental marble architecture are being documented, in the foundation of the facade and of the adyton, in the column's shape, in the impressive door-ways, in the shaping of the entablature and of the marble roof. Here are the architectural forms that prevailed throughout the course of ancient architecture, and still today are employed world-wide as an expression of the monumental.
The history of cult dining in sanctuaries and the creation of special buildings for this purpose can also be observed at Iria. Here the succession of the early archaic, apsidal building of the rectangular classical and the late Roman ceremonial dining-halls, takes this type of building back to much earlier times than it was known up to nοw. With the presentation of the Iria sanctuary the pioneering contribution of Naxos to the formation of Greek architectural forms can be examined in detail by the scholarly world and understood by the general public. At the same time it provides a unique picture of the unbroken continuity of a high civilisation for over three thousand years in the heart of the Aegean. 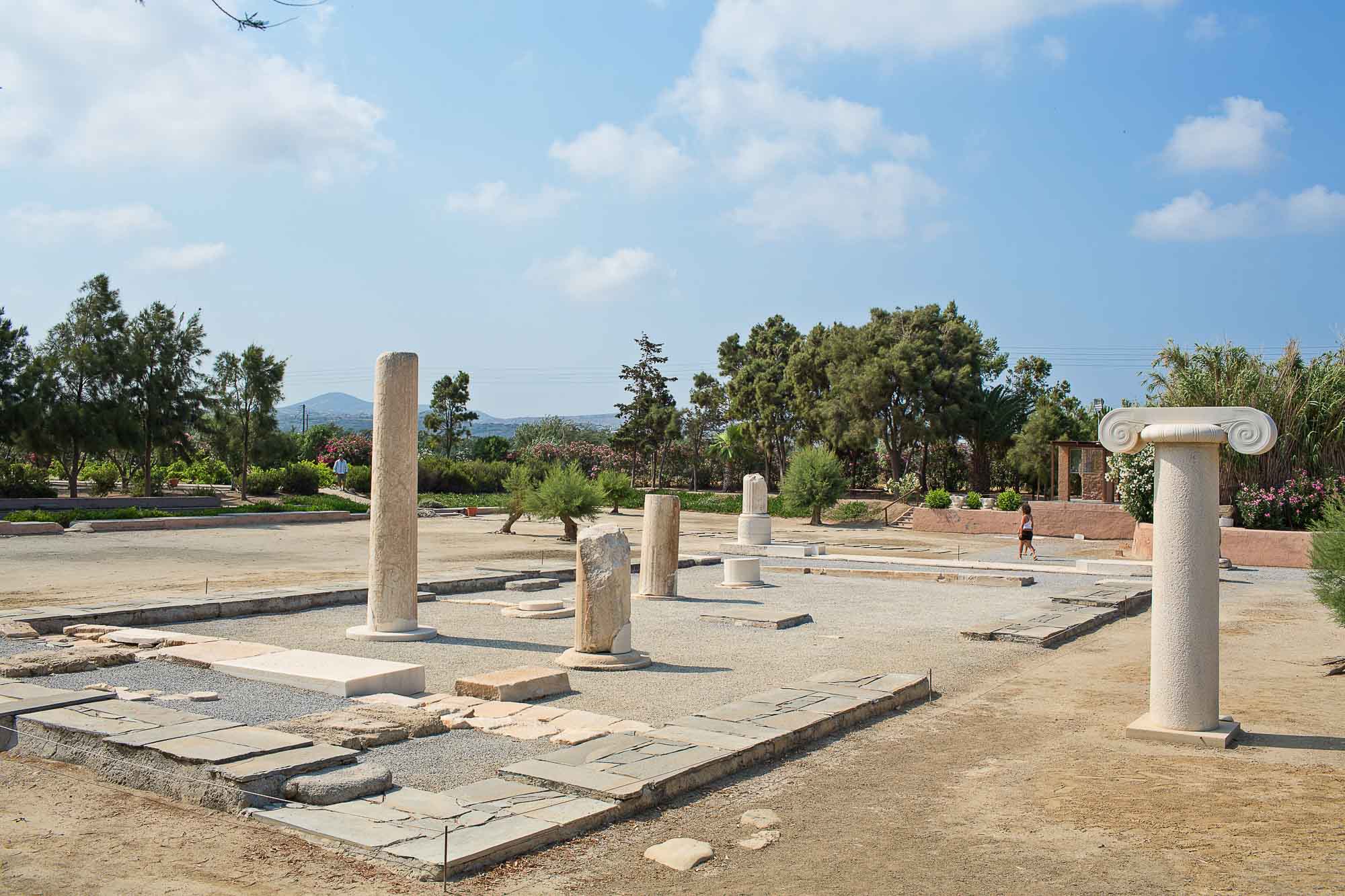 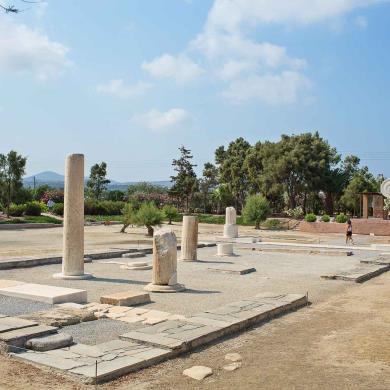