The Archaeological Museum of Mykonos was built in 1902, in order to house the finds from the "Purification Pit" of 426/5 BC, which was discovered in 1898 on the islet of Rheneia, by D. Stavropoulos. It was designed by Alexandros Lykakis and paid for by the Ministry of Education and the Archaeological Society of Athens, while the land was donated by the Municipality of Mykonos. The original Neoclassical building assumed its present, "insular" form in 1934, and the large, eastern room, was added in 1972.
The exhibition of the museum includes a large number of vases, ranging from the prehistoric to the late Hellenistic period (25th-1st century BC), grave statues, stelae and funerary urns from Rheneia, and very few finds from Mykonos.
The museum contains the following collections :
• Funerary statues and grave stelae dating from the 2nd/1st century BC.
• Pottery dating from the 25th to the 1st century BC.
• Clay figurines dated to the 2nd/1st century BC.
• Jewellery and small objects of the 2nd/1st century BC.
Among the most important exhibits are:
• Large relief pithos decorated with scenes from the Capture of Troy. It had been used as a burial pithos and was discovered in the summer of 1961, during the digging of a well, in the centre of the town of Mykonos. The descent of the Greeks from the Wooden Horse is depicted on the neck, and the body is covered with panels showing warriors attacking women and children. Height 1,40 m. Dated to the 7th century BC.
• Large Archaic amphora with linear decoration. A sphinx is depicted on the neck and the head of a horse on the body.
• Grave stele of Glykon who was lost at sea. The deceased young man is represented seated on the rocks, sad and thoughtful, gazing towards the prow of his ship. On the upper part of the stele a ribbon is bound. Beneath the representation there is the inscription "Glykon, son of Protogenis, virtuous, fare thee well". Dated to the 2nd/1st century BC.
• Grave stele of Tertia Horaria. The dead woman is represented seated, extending her hand in a farewell gesture to her husband who stands in front of her. A young slave holds the jewellery box of her dead lady. The stele was placed above a marble sarcophagus bearing the inscription "Tertia Horaria", at the Hellenistic cemetery on Rheneia. Dated to the 2nd/1st century BC.
• Cult statue of Heracles from Rheneia. Hellenistic copy of a 5th-century Attic original. It was found in 1899 in the Sanctuary of Heracles, within a small temple. The hero is represented nude, holding in his left hand the club and the lion-skin. Made of parian marble, superbly polished on the nude body. Dated to the 2nd/1st century BC.
• Archaic hydria decorated with stylized floral patterns and horses. A large number of similar vases were found in the "Purification pit". They are products of an unknown Cycladic workshop (probably Melian or Parian), the only one among the Cycladic workshops that employed the human figure - mainly young women's heads - as a decorative theme. Dated to the 6th century BC.
• Attic red-figure hydria. It is decorated with the figure of flying Nike (Victory) holding a box, and a deer running towards the left.
• Clay figurine of a young woman clad in long chiton and himation. Traces of the original bright colouring are preserved on the surface. It was found at the Hellenistic necropolis on Rheneia and dates from the 2nd/1st century BC.
• Funerary statue. The dead man is represented standing, dressed in chiton and long himation, and possibly holding something with both hands. The head was worked separately and placed in the cavity between the shoulders. It was found at the Hellenistic cemetery on Rheneia and dates from the 2nd/1st century BC. 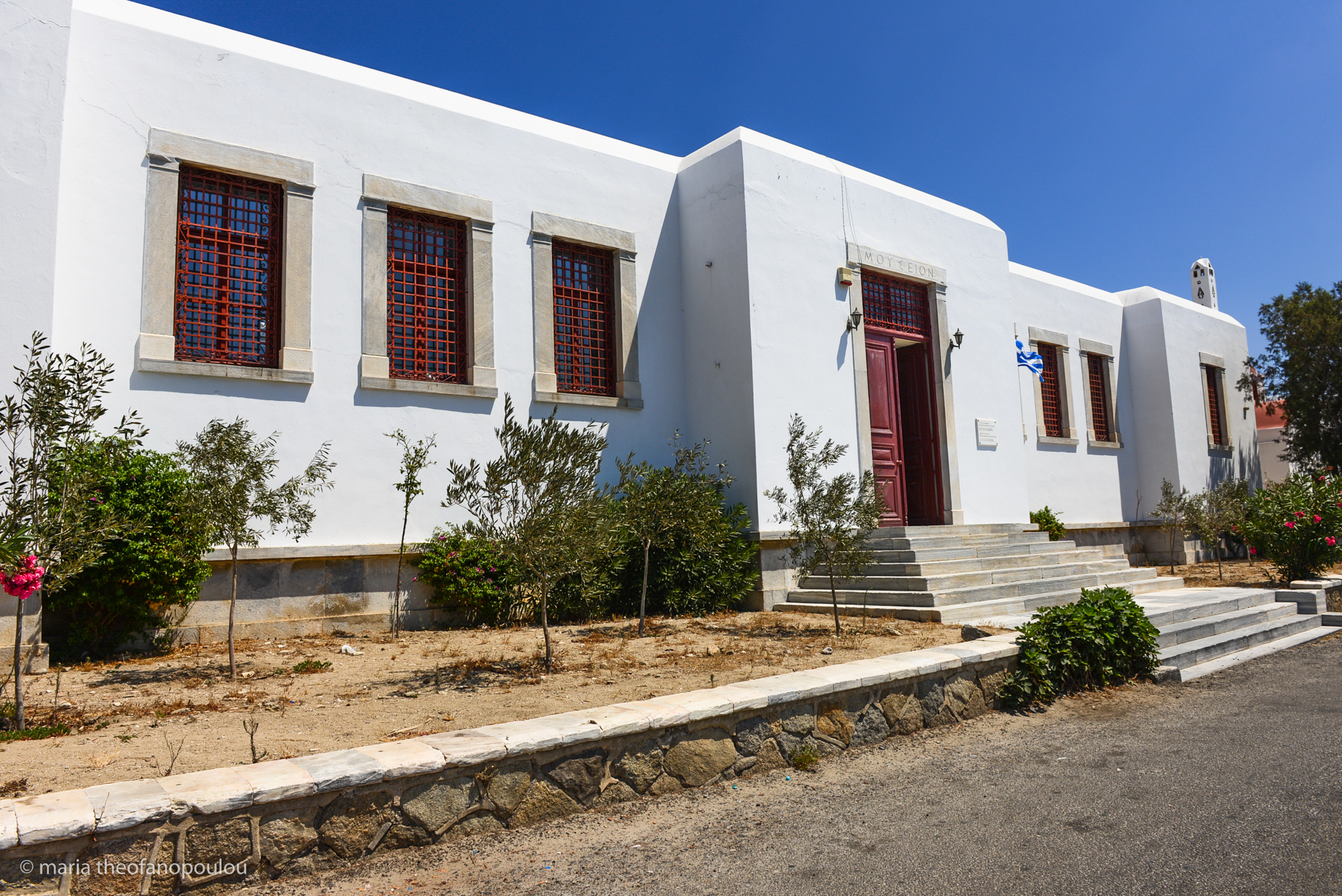 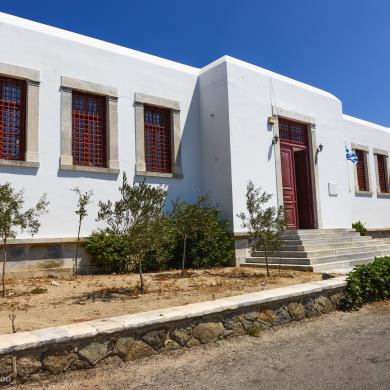 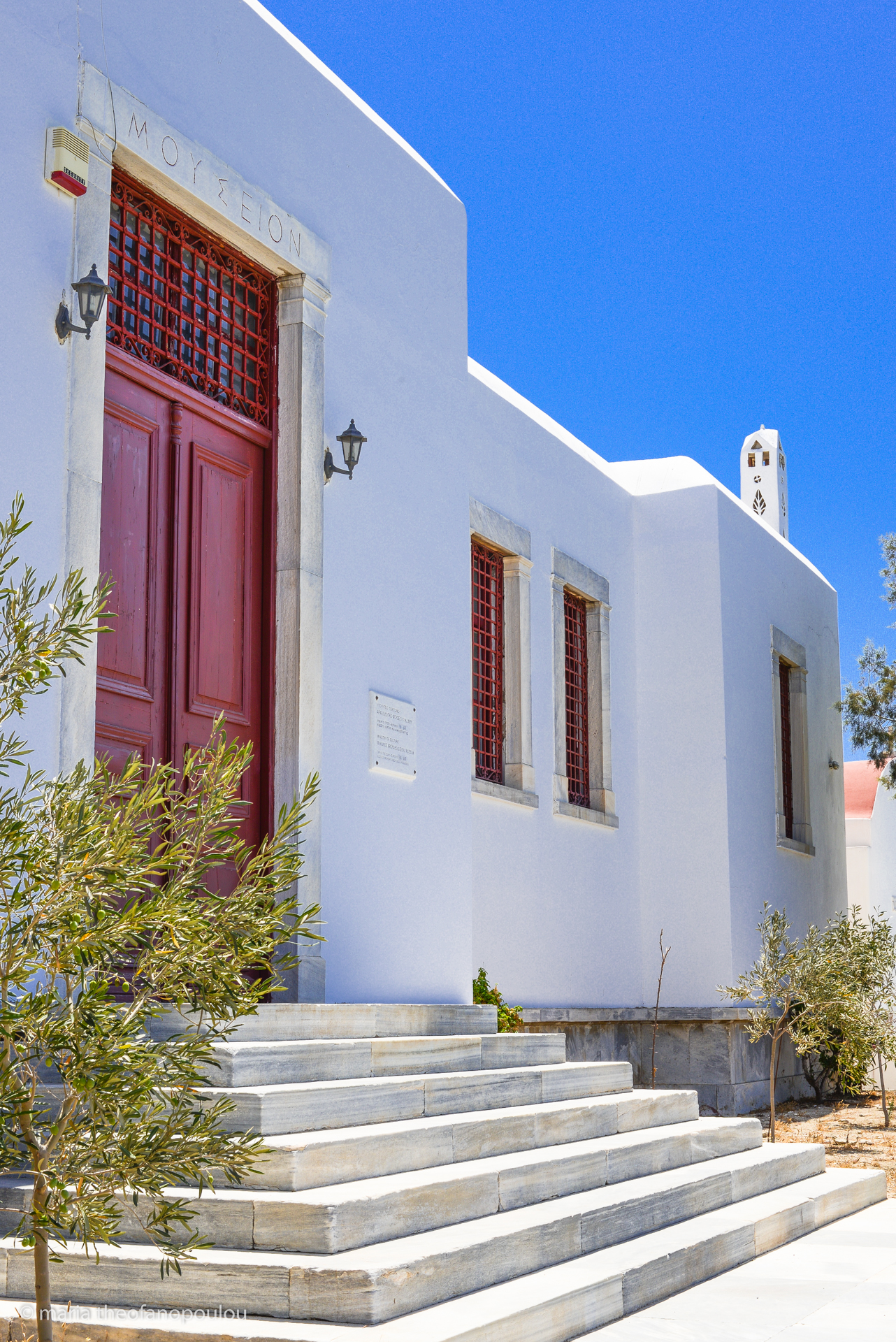 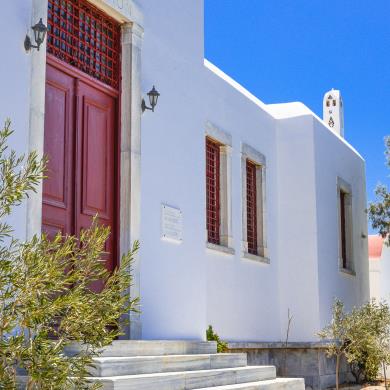 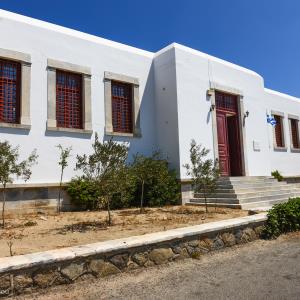