The interior of the Archaeological Museum

The museum was built in 1970 by the architect Paul Mylonas and opened to the public in 1978. It contains collections of finds from the sanctuary of Poseidon, the sanctuary of Palaimon, the Hellenistic settlement at Rachi, and from the excavations in the area of Isthmia and the ancient harbour of Cenchreai.
The most important items of the exhibition are:
- Marble perirrhanterion. The basin is supported on four korai (female statues) alternating with busts of bulls or rams. It was found in the sanctuary of Poseidon and dates from the third quarter of the 7th century BC.
- Stone jumping-weights. One of them is inscribed and dates from the middle of the 6th century BC.
- Bronze helmets of the "Scythian type" from the sanctuary of Poseidon. Dated to the 6th or the 5th century BC.
- Statue of Amphitrite. Upper part (the head is missing) of the cult statue of Amphitrite, which stood inside the temple, next to the statue of Poseidon. Dated to the Antonine period, in the 2nd century AD.
- Marble head of an athlete. Head of a young victor of the games, dated to the Roman period.
- Marble votive stele of a victor at the Isthmian Games. Dated to the end of the 2nd century AD or later.
- Mosaics of glass panels. Mosaics made of glass and a kind of plaster in the "opus sectile" technique, bearing pictorial representations of water birds and plants, the view of a harbour and the figure of a philosopher. They were found at the ancient harbour of Cenchreai and were probably imported from Egypt. Dated to the second half of the 4th century AD.
- Decorative ivory plaques from the ancient harbour of Cenchreai. Dated probably to the 4th century AD. 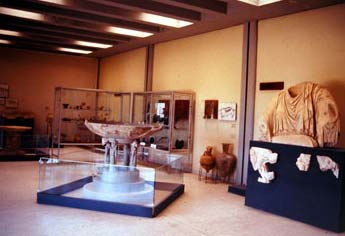 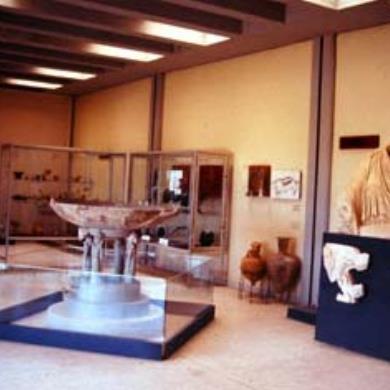 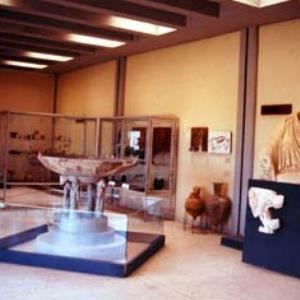