The great Temple of Hera (Heraion) had its origins in the 8th century BC, when it was the first Greek temple to be surrounded by a peristyle of columns; its 7th-century successor was also innovatory in that it was the first temple to have a double row of columns across the front. These were both surpassed by the temple begun around 570 BC by Rhoecus and Theodorus, who built a colossal structure measuring some 45 m by 80 m, the earliest in the new Ionic order. It was supported by at least 100 columns, whose moulded bases were turned on a lathe designed by Theodorus. Thirty years later this temple was destroyed in a Persian raid and a replacement was planned on an even vaster scale, but it was never to be completed. The complex around the Heraion includes altars, smaller temples, stoas, and statue bases, all located inside the sanctuary, along with the remains of a 5th-century Christian basilica. The temple is fundamental to an understanding of classical architecture. The stylistic and structural innovations in each of its successive phases strongly influenced the design of temples and public buildings throughout the Greek world. 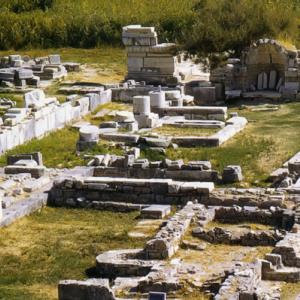