The Palace within the Archaeological Site of Malia. The largest part of the ruins visible today belongs to the New Palace period.

Human presence at Malia during the Neolithic period (6000-3000 BC) is attested only by potsherds, but habitation was continuous from the middle of the 3rd millennium BC until the end of Prehistory. Houses of a Prepalatial settlement (2500-2000 BC) have been found under the palace, while graves of the same period are located near the sea. The first palace was built in around 2000-1900 BC. The already existing significant settlement of which are preserved parts around the palace, was then converted into a palatial centre-city. The palace was destroyed in around 1700 BC and rebuilt in 1650 BC at the same site, following the plan of the older palace, while a few changes took place 50 years later. The destruction of the new palace came in c. 1450 BC, along with the destruction of the other Minoan palatial centres. The site was reoccupied for a short period in the 14th-13th century BC Remains of a Roman settlement cover an extensive area at the site called "Marmara", where a basilica of the 6th century is also preserved.
The English admiral Th. Spratt, who travelled in Crete in the middle of the 19th century, reports the finding of gold sheets at the site "Helleniko Livadi". In 1915, Joseph Chatzidakis started a trial excavation on the hill called "Azymo", and brought to light the southern half of the west wing of the palace, as well as the tombs by the sea, but he stopped the investigation. Finally, the French School of Archaeology at Athens resumed the excavations, which are continued until today with intervals, at the palace, the sectors of the town and the cemeteries on the coast. The results have been published in the series of "Etudes Cretoises" since 1928, and in the works of H. Van Effenterre and O. Pelon. The finds are exhibited in the Museum of Herakleion, and some in the Museum of Aghios Nikolaos.

The most important buildings of the site are:
The Palace. The largest part of the ruins visible today belongs to the New Palace period; of the first palace only a section is preserved, to the NW of the building, while a small oblique structure in the north court dates to the Post-palatial period. Access to the palace today is through the west paved court, which is crossed by slightly raised paths, the so-called "processional ways". Every side of the complex had an entrance, but the main ones were those in the north and south wings.
The palace is arranged around the central court, which had porticos on the north and east sides, and an altar at the centre.
The largest and most important part of the palace is the two-storeyed west wing with cult and official appartments, and extensive magazines. Impressive is the Loggia, a raised hall opening to the court, and the rooms to the west, all related with cult practice, the "pillar crypt" with an antechamber, also of religious character, and between these two, the grand staircase leading to the upper floor. Another broad flight of steps, possibly used as a theatral area, is located to the SW of the central court, beside the famous "kernos" of Malia.
The south wing, also two-storeyed, included habitation rooms and guests' rooms, a small shrine, and the monumental paved south entrance to the palace that led directly to the central court.
The SW corner of the of the palatial complex is occupied by eight circular structures used for the storage of grain (silos).
The east wing is almost completely occupied by magazines of liquids, with low platforms on which stood pithoi (large storage vessels), and a system of channels and receptacles to collect liquids.
Behind the north stoa of the central court is the "hypostyle hall" and its antechamber. Above these rooms, on the upper storey, there was a hall of equal size, interpreted as a ceremonial banquet hall. To the west of these rooms, a stone paved corridor connects the central court with the north court, which is surrounded by workshops and storerooms, and with the NW court, also called "court of the dungeon". To the west of this lie the official rooms of the palace: at the centre, the reception hall with the typical Minoan polythyra, and behind this, the sunken lustral basin.
The palace is surrounded by the town, one of the most important Minoan towns in Crete. To the north of the west court is the agora and the curious "hypostyle crypt", which has been interpreted as a kind of council chamber, connected with the prytaneia of historic times.
The most important of the excavated sectors of the town and isolated houses are sector Z, houses E, Da, and Db; very important is sector M, dated to the First Palace period, which covers an area of c. 3,000 sq.m. and is actually the most important settlement of this period in Crete. The unusually extensive buildings of this neighbourhood included religious, official, and storage rooms, and workshops, and it seems that in general, it had functions similar to those of the palace.
The cemetery of the First Palace period is located to the NE of the palace, near the north coast. The most important of the graves found is the large burial complex called Chryssolakkos, which yielded the famous gold bee pendant. 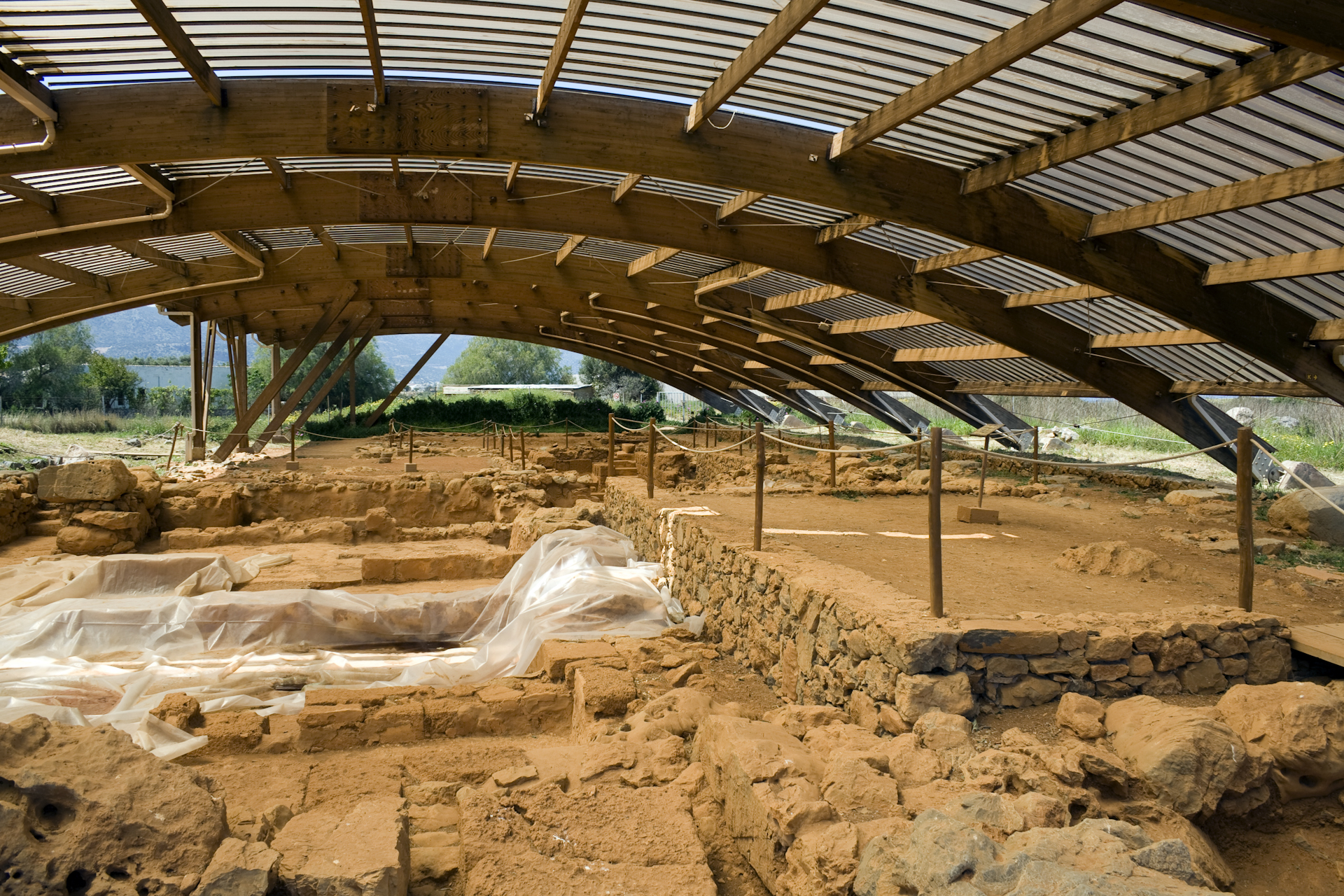 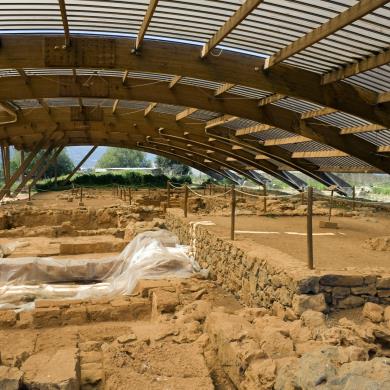 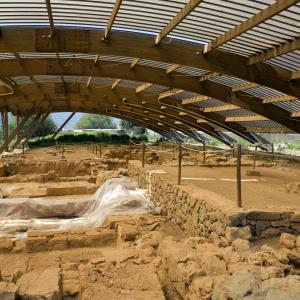