Aerial photo of the ancient theatre at Dodoni

Aerial photo of the ancient theatre at Dodoni

The ancient site of Dodona is located 22 km. south of Ioannina, in the narrow valley between the mounts Tomaros and Manoliassa. The first remains on the site date from the prehistoric period and the first deity worshipped here was the Earth goddess. The cult of Zeus and the sacred oak tree was brought to Dodona by the Selloi, a branch of the Thesprotian tribe, between the 19th and 14th centuries B.C. and soon became the prevalent cult of the sanctuary.
The first offerings from southern Greece date from the end of the 8th century B.C. and building activity began in the 4th century B.C. The sanctuary reached the highest point of its prosperity in the 3rd century B.C. but was destroyed by the Aetolians in 219 B.C. It was rebuilt shortly thereafter and continued to be in use until its destruction by the Roman invaders in 167 B.C. In the Roman period it had a different function and its end came in the 4th century A.D., during the reign of Theodosius the Great. The area of the sanctuary was then covered with Christian basilicas. Today the theatre is used for performances.
The first excavations on the site, carried out by N. Karapanos in 1873-75, confirmed the location of the sanctuary and revealed a great quantity of finds. The following excavation campaign was undertaken shortly after 1913, by the Archaeological Society, under the direction of G. Soteriades but was stopped by the events of 1921. The site was again investigated by D. Evangelides in the period from 1929 until 1932 and in the 1950's under the direction of D. Evangelides and S. Dakaris. Since 1981 the Athens Archaeological Society commenced a new series of systematic excavations on the site with the financial support of the University of Ioannina.
Systematic restoration work in the theatre, the stadium, and other monuments of the site started in 1961 and was based on the study of the architect B. Charissis. The whole project was financed by the Archaeological Society and the Program for Public Investments.
The most important monuments of the site are:
- The Sacred House (temple of Zeus, Building E1). At least four architectural phases are distinguished in the building whose original form remains unknown. It seems that in the beginning it was an open space with bronze tripod cauldrons surrounding the sacred oak tree. The first temple was built in the early 4th century B.C. and was gradually enlarged and repaired in the 4th, 3rd and 2nd centuries B.C. The latest and better preserved building measures 20.80 x 19.20 m.
- The Theatre is one of the largest in Greece, seating 18.000 persons. It consists of the cavea (auditorium), the orchestra, a doric stoa and a wooden proscenium. It was built in the 3rd century B.C., during the reign of Pyrrhus, and was destroyed in 219 B.C. by the Aetolians. At the end of the 3rd century B.C. it was restored but was again demolished by Aemilius Paulus in 167 B.C. During the 1st century B.C. it was turned into an arena.
- The Bouleuterion (Building E2). The building comprises a large hall (measuring 43.60 x 32.35 m.) and a Doric stoa in the front. It was erected at the end of the 4th or the beginning of the 3rd century B.C. and was rebuilt twice, after its destruction by the Aetolians in 219 B.C., and by the Romans in 167 B.C. It was again repaired by Augustus and remained in use until the end of the 1st century B.C.
- The Stadium. The monument is not completely excavated. It is one of the few ancient stadiums with stone seats (21 or 22 rows of benches), contemporary with the second architectural phase of the theatre (late 3rd century B.C.).
- The Acropolis. It occupies the top of the hill and is surrounded by a polygonal wall (750 m. long) dated to the 4th century B.C. The wall is reinforced with rectangular towers and has three main gates. Inside the walled area are preserved foundations of buildings and an underground water cistern, carved in the rock.
- The Prytaneum (Building H). Rectangular building (measuring 17.30 x 10.70 m.) dated to the 4th century B.C. It is the earliest structure of the sanctuary after the Sacred House. It functioned as a resting place for the priests of Zeus or the leaders of the Molossian Koinon (League) and was destroyed by the Aetolians in 219 B.C. 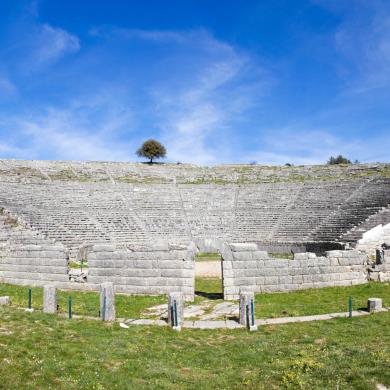 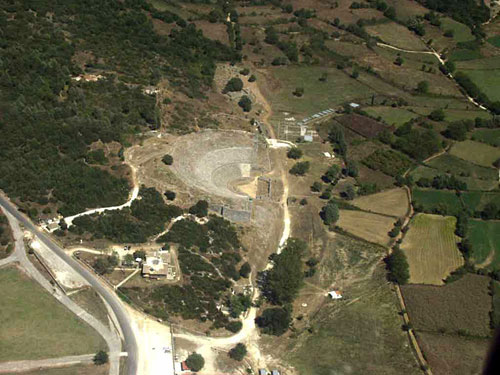 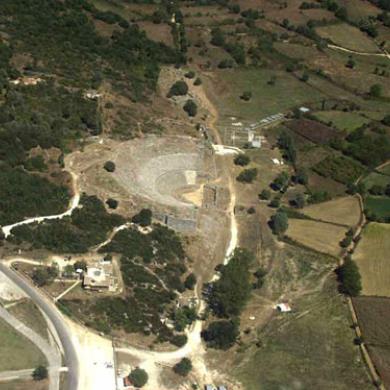 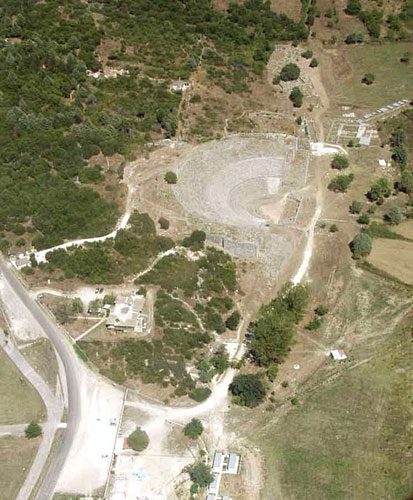 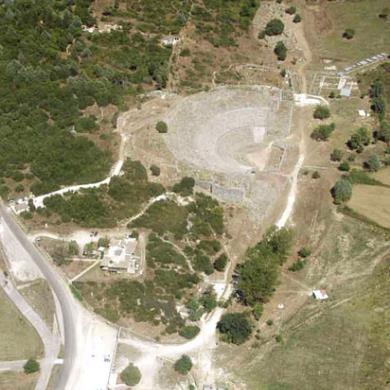 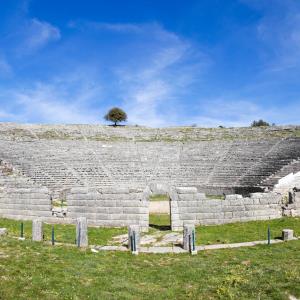 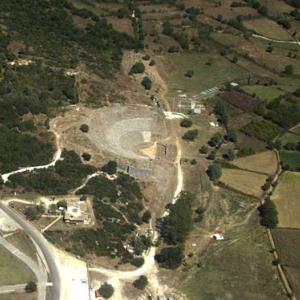 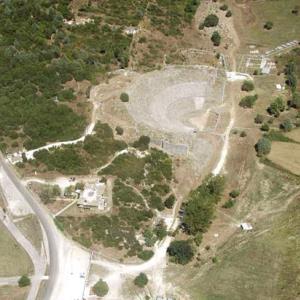