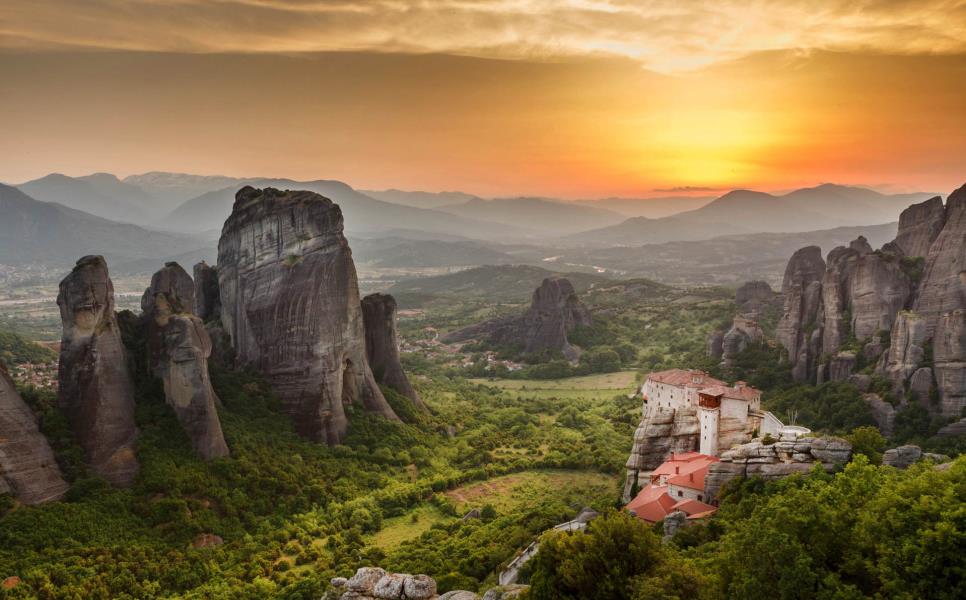 In a region of almost inaccessible sandstone peaks, monks settled on these 'columns of the sky' from the 11th century onwards. Twenty-four of these monasteries were built, despite incredible difficulties, at the time of the great revival of the eremetic ideal in the 15th century. Their 16th-century frescoes mark a key stage in the development of post-Byzantine painting.

'Suspended in the air' (the meaning of Meteora in Greek), these monasteries represent a unique artistic achievement and are one of the most powerful examples of the architectural transformation of a site into a place of retreat, meditation and prayer. The Meteora provide an outstanding example of the types of monastic construction which illustrate a significant stage in history, that of the 14th and 15th centuries when the eremitic ideals of early Christianity were restored to a place of honour by monastic communities, both in the Western world (in Tuscany, for example) and in the Orthodox Church.

Built under impossible conditions, with no practicable roads, permanent though precarious human habitations subsist to this day in the Meteora, but have become vulnerable under the impact of time. The net in which intrepid pilgrims were hoisted up vertically alongside the 373 m cliff where the Varlaam monastery dominates the valley symbolizes the fragility of a traditional way of life that is threatened with extinction.

The monasteries are built on rock pinnacles of deltaic origin, known as Meteora, which rise starkly over 400 m above the Peneas valley and the small town of Kalambaka on the Thessalian plain. Chemical analysis suggests that the pinnacles were created some 60 million years ago in the Tertiary period, emerging from the cone of a river and further transformed by earthquakes. The Meteora are enormous residual masses of sandstone and conglomerate, which appeared through fluvial erosion. Seismic activity increased the number of fault lines and fissures and hewed the shapeless masses into individual sheer rock columns. Hermits and ascetics probably began settling in this extraordinary area in the 11th century. In the late 12th century a small church called the Panaghia Doupiani or Skete was built at the foot of one of these 'heavenly columns', where monks had already taken up residence.

During the fearsome time of political instability in 14th century Thessaly, monasteries were systematically built on top of the inaccessible peaks so that by the end of the 15th century there were 24 of them. They continued to flourish until the 17th century. Today, only six monasteries - Aghios Stephanos, Aghia Trias, Varlaam, Roussanou, Aghios Nicholaos Anapafsas and the Great Meteoron - still house religious communities.

The area includes forested hills and river valley with riverine forests of Platanus orientalis and species such as the endemic Centaurea lactifolia (found near Koniskos village) and Centaurea kalambakensi. The nearest protected area is Trikala Aesthetic Forest (28 ha), created in 1979, which has been planted with Pinus halepensis and Cupressus sempervivens. The potential vegetation cover is described as supra-Mediterranean, with climax cover of Quercus and Ostrya species and Fagus sylvatica beech forest above 700 m. 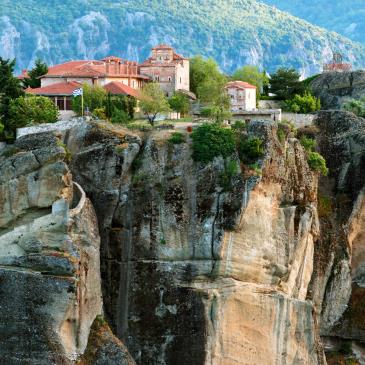